The Lumbridge cemetery is a small cemetery in Lumbridge just south of the church and north of the swamp. The entrance to the Lumbridge Catacombs and a yew tree are located in the graveyard. It plays a part in several quests. A numebr of crows, which fly away when approached, can be found in the area.

The Restless Ghost can be started in the Lumbridge Church adjacent to the graveyard, and involves aiding Father Aereck in dealing with a restless ghost present in the cemetery.

Xenia can be found by the entrance to the catacombs, and she starts The Blood Pact quest. The cemetery also features the finale of the Heart of Stone quest where a rift opens that takes the player and Kipple into a cave where they find Xenia. After this quest Xenia is replaced with Wizard Ilona.

The cemetery is also featured in You Are It, where the player must dig up Duchess Oriana's grave.

In the now removed Lumbridge Task, Escort Duty, the player had to take the wounded man to Xenia in the cemetery.

During the 2020 Halloween event, Pestilence's task required solving a riddle involving the Grinning Spectre, the Mischievous Ghost (2020 Halloween event) and the Mocking Spirit found in the cemetery. During the Grand Party event, a temporary miniquest parodying several of the classic quests, involved giving the restless ghosts Father Urhney's spare skull in exchange for the extra, extra fine flour, which Father Aereck tried to use to exorcise the ghost. 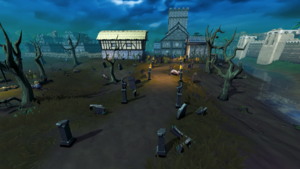 The path into the swamp outside the cemetery