Learning the Ropes was the quest that players completed when creating and learning how to use their character. It was a tutorial quest, and replaced Tutorial Island on 14 July 2008. On 17 September 2009 it was reworked as Unstable Foundations, which would be the new tutorial until its removal on 25 May 2011.

Before you get started, you must create your character. You must fill in a few things: Mouse, Gender, Head, and Body options. The Mouse menu is to choose how many mouse buttons you have: one or two. The Gender menu lets you decide your character's gender (male or female). The Head menu lets you decide what your character's hair, skin, and beard will look like. The Body menu lets the player decide what the avatar's clothing and body will look like. The Creating your Character part of the tutorial reminds you that all settings put in can always be changed at a later date.

After customizing the character, speak to Sir Vant, a White Knight. He will explain that he is there to fight a large, dangerous, three-headed dragon. A cutscene will follow, with Sir Vant attempting to defeat the dragon.

While he is fighting, he will warn you that a goblin had come down from the village to steal money. The goblin cannot hurt you, because it had been stunned by some falling boulders. After killing the goblin and picking up its drops (bones and three coins), Sir Vant will tell you about things like drops and your inventory.

Prepare to ascend to the surface[edit | edit source]

Sir Vant will tell you about your Quest List, death, and random events. He will then ask you to get him some supplies. Right as the player continues to the surface of Lumbridge, the three-headed dragon appears again, along with a mysterious chaos druid. Sir Vant tells you to go to Nemarti and quickly get a training bow and arrows to kill the druid, which is helping the dragon. Go upstairs. Use the run button to reach the next tutor.

Next, you must go to Nemarti, the Ranged instructor. Nemarti can be found near all the other Combat Tutors. She will give the weapons to you and tell you to practice on the targets before facing the druid. Go back down to Sir Vant and kill the Chaos Druid (Level 13) with your arrows.

Note: You will have to use long-range, so you can no longer have 0 defence xp.

The next few sections can be completed in any order.

Follow the arrow towards the staircases in Lumbridge Castle. Climb to the top floor to reach the bank. Talk to the Bank tutor to open your bank account. Deposit an item, then drag it into the + sign to start a new tab. After you have mastered tabbed banking, you will be finished with this section.

Next, go to Finlay, the Fishing Tutor. He will give you a crayfish cage for catching crayfish. You finish once you catch two crayfish and read the skill interface.

Sir Vant tells you to get some runes from Mikasi for him so he can weaken the dragon. Mikasi is found near the Ranged tutor. Mikasi will give you some mind runes and air runes, but will not trust you with more advanced runes until you master magic. Once you cast Wind Strike on the magic dummies, she will give you a bag of runes. Give this to Sir Vant.

Visit the Lumbridge mine and talk to the Mining Tutor, Monlum. He will give you a bronze pickaxe. Prospect the rocks until you find copper ore. Mine it, talk to the instructor, then prospect the other set of rocks to find tin ore. Mine it as well. This section and the Smithing Section can be skipped and the quest can still be finished.

A player fishes for crayfish.

Talk to Feoras, the Smelting Tutor to learn how to use furnaces. Smelt your tin and copper to retrieve a bronze bar.

Back in the mines, talk to Sani the Smithing tutor to get a hammer and learn how to smith items on an anvil. Make a bronze hatchet.

Talk to Wilfred, the Woodcutting tutor. He will tell you to cut down a tree with your hatchet to obtain some logs. Do so.

A player helping Sir Vant by killing the Chaos druid.

Talk to Sir Vant. He will briefly explain cooking on a fire. Next, you will gain access to the emotes menu. Try an emote. Next, open up your music player and play a song of your choice. Open up your Friends List, Ignore List, clan chat, and options lists. Then adjust the text filter buttons at the bottom of the screen. View the report abuse screen to finish the tutorial. Talk to Sir Vant one last time, then climb up the ladder to the world of RuneScape. 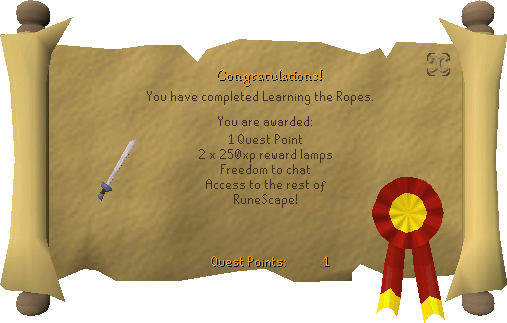