From the RuneScape Wiki, the wiki for all things RuneScape
Jump to navigation Jump to search
Farquie the Cleaner? (edit)? (edit) 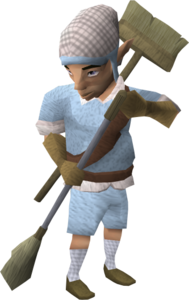 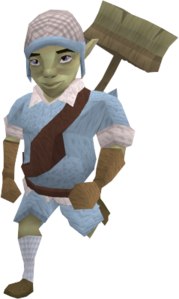 Farquie the Cleaner is a gnome that was busy removing the landing pads in the former Gnomecopter Tours area to the north-west of Lumbridge. According to Farquie, the Gnomecopter Tours closed down because his boss, Hieronymus Avlafrim and one of the gnomecopter pilots, Sasquine Huburns, decided to retire and get married. If pressed, he refused to take any bribes for a ride on a gnomecopter and reiterated that the gnomecopters were no longer there.

The Gnomecopter Tours were removed on 25 March 2009 and were replaced by Beefy Bill and Farquie the Cleaner as Jagex no longer wished to advertise members content on free play worlds.

Farquie featured in the 2016 Easter event as part of a group taking a tour of Sliske's chocolate factory. During the event, he briefly became one of Sliske's wights.