From the RuneScape Wiki, the wiki for all things RuneScape
Jump to navigation Jump to search
For other uses, see Thieves' Guild (disambiguation).

The Thieves' Guild is a members guild that is owned and established by Guildmaster Darren Lightfinger. There are no skill requirements to enter the Thieves' Guild, but to use its proper facilities, it requires the quest Buyers and Cellars to be completed.

The guild is an excellent area to train Thieving, even before completing the quest. Once the cellar is fully renovated, it has a bank, general store, and an expanded area. It is very useful compared to some other guilds.

Funds are raised for the guild's expansion and initial opening by illegal activities and capers. 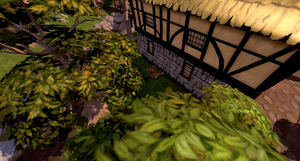 The Thieves' Guild is located under the Zamorakian herbalists' house just north of the Lumbridge furnace. It can be accessed via the trapdoor just outside of the house's north wall. The guild is not labelled on the map, except by the quest symbol.

The fastest way to get to there is with the Thieves' Guild teleport, which can be bought from the Grand Exchange for 3,147. It can also be bought from Dodgy Derek's Dirty Deals with pilfer points earned from safecracking. Alternatively, players can use the teleport option offered by the master camouflage outfit, or teleport to the Lumbridge lodestone and walk north.

Darren Lightfinger seeks to build the Thieves' Guild, where those of his profession can meet together and enjoy their passion. Enlisting the help of an adventurer, he directs the player to Chief Thief Robin waiting at the south wall of Lumbridge Castle. Robin then informs the player about the golden chalice. It is currently in the hands of a priest in the Lumbridge swamp. The priest is very alert, so to distract him the player lights a fire outside the house. The old man becomes off guard and the adventurer steals the chalice from Father Urhney. Darren thanks the player and sells the highly valued, gold object. With the money from the sale, Darren pays for the basic facilities of the guild, opening the unregistered Thieves' Guild. Masters of Thieving move in and buildings begin to be constructed. Yet, Darren has further plans for his new centre of business.

During or after completing the Quest players at least level 62 Thieving can ask Darren Lightfinger to let them try pickpocketing the training dummy again for an additional 2,000 Thieving experience. They will need to pickpocket the dummy multiple times to receive the experience. Doing so is a requirement for the master quest cape.

After completing the Buyers and Cellars quest, the player can access a small version of the guild. The guild can be expanded by doing a series of miniquests called capers; there are currently three. To start a caper, talk to Guildmaster Darren Lightfinger. Completing each caper will result in a larger version of the guild with more activities to do in it, a Thieving experience reward, and other rewards. The current capers are:

Darren again enlists his fellow guild member, the adventurer, on another caper to expand the guild and raise more money. He is paying for a toy dragon made of rubies to be made by Urist Loric, yet is scamming him to make more money for the guild's expansion. He asks the adventurer to steal the toy and then ask the dwarf to give Darren his money back due to no product being available for Darren. After talking to the local guard, the player finds out the dwarf is obsessed with his strange talisman. The player drops the dwarf's talisman, and being obsessed with it, the dwarf moves away from the stall to grab it. After swiftly distracting the guard, the player runs over to the dwarf's stall and steals the toy. As part of the scam, demanding the money from the dwarf and giving it to the guild. Go back to the Thieves' Guild and speak with Darren, handing him the toy dragon and using the bank note on him (if for so some reason the bank note disappears, you can find it in your bank). Darren manages to expand the guild's training facilities. Volunteers and more Thieving masters move in, and another area is constructed. Also, the dwarf opens a new stall selling crafting equipment.

Darren seeks to expand the guild more, still not seeing its full potential. He hears that a magician blew herself up in a scientific explosion, turning herself into pure crystal fire, and that the blast radius was massive. The magic in these expensive crystallised flame fragments is worth loads of money, and people are searching for them. He asks the player to find all 32 fragments before others do. He informs that people around RuneScape have found these and picked them up, and the player must steal it from them. The player searches far and wide, in Lumbridge, in Al Kharid, the H.A.M. Hideout, the Rogues' Castle in the north Wilderness, and even north of Ardougne. After stealing up to 6 flame crystals from each of the groups, the player returns them to Darren, in 4 sets of 8. He sells them, gives the player a share, and pays for more expansion. A new Thieving supply store opens up, more people move in, and more buildings are made. The player also becomes more skilled at Thieving.

A Guild of Our Own (miniquest)[edit | edit source]

Main article: A Guild of Our Own (miniquest)

Darren wants the guild to be registered as an official guild so that they get funding and full benefits. He also wants the expensive bonds that are located in the registration office. He enlists the now heavily trusted player on another caper to use trickery, theft, or whatever skills necessary to register the guild as official. The player makes a vial of stench, which makes people unable to clearly see the person holding it, under Darren's orders. The player travels to Ardougne to visit the Registrar. After stealing her key, the player uses it to gain access to a room to distract her. The player then swiftly blackjacks the guard in the room to obtain a vault key and runs to the trapdoor. The player enters the vault room. After picking the lock on the gates and passing traps, the player steals bonds from the vault. The player then talks to the Registar again to get the guild registered. With the money from Registration and the bonds, Darren manages to complete the Thieves' Guild. A new bank opens, more buildings are constructed and the final people needed in the guild move in.

Safecracking is an expansion to the guild that was released on 30 April 2018, which can only be accessed after completing all of the available capers. With level 62 Thieving, players can begin stealing from safes all over RuneScape. To get started, speak to the safe-cracking trainer in the Thieves' Guild to be given advice and a stethoscope.

The Thieves' Guild is very large once fully expanded, or even when partially expanded, with many facilities and rooms to offer. These can be used for training, for banking, for shopping, and for a few other purposes.

Here can be found Darren Lightfinger and Chief Thief Robin who run the guild together and can allow a player to start the quest Buyers and Cellars. A pickpocketing dummy, the Mark I, which gives enough experience to provide a new member level six Thieving, can also be found in this area, as well as the entrance to the surface and back and some storage boxes. Additionally, three miniquests called Capers can be started here. Prior to completion of Buyers and Cellars, this small room is the entirety of the guild.

This is the central room, where most of the people in the guild are and where most of the training tools and equipment is found. All the expansions of the guild connect from here. Four pickpocketing dummies are always in the centre. As you progress through the capers people such as pickpocketing volunteers, trainers, coshing volunteers and advanced trainers move in. They can be pickpocketed and knocked out with a blackjack for experience. The hall becomes bigger and nicer as the capers go along.

Training Thieving in the guild results in the player earning hanky points. A player can earn a set amount of hanky points per week, based on the player's Thieving level. A player can check or trade in hanky points for experience by talking to any trainer or volunteer in the central hall except the coshing trainer and volunteers (presumably because that would add too many right click options for those npcs). Players may collect up to their maximum amount of hanky points at any time, but these may only be exchanged for Thieving experience weekly, resetting on Wednesday at 00:00 UTC. 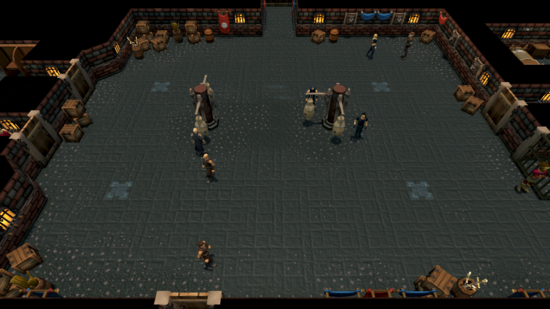 The cell doors stay open for 5 minutes. No experience is received if you open the cell from the inside. Chests close after being open for a certain amount of time and may be looted multiple times before their respective door closes.

This area is possibly one of the best places to train Thieving to level 50. To maximise experience gained per hour, open the doors clockwise starting at the north westernmost gate.

North of the Training Room is the office, with some desks, a massive vault with large polished buttons on it. It is unknown what the purpose of the vault is yet. The office is locked, with some practice chests inside. This is probably the main office where guild matters and other things are dealt with. Whenever the door is attempted to be opened a guild member stares at you. This may lead to a further caper or quest involving the vault.

This little store is more like a Thieving black market vendor. It requires completion of Lost Her Marbles to be built. It sells lockpicks, blackjacks and other Thieving tools useful in the guild. It is similar to Martin Thwait's store in the Rogues' Den. No general store items are sold here, only Thieving equipment and tools. However, Derek will buy things like any other general store. This store is probably used to generate money for the guild via sales.

This is a branch of the Bank of RuneScape. It requires completion of A Guild of Our Own (miniquest) to be built. It is opened due to the guild being officially registered at the Guild Registry. It runs all the features of any bank outlet.

Mr Pinsworth, the banker, implies that the Thieves Guild branch of the Bank of RuneScape may have a dodgy origin and may be an irregular or illegal branch. This would be in keeping with the spirit of the guild.

Different stages of Thieves' Guild depending on quests completed