Tutorial Island is an island where new players to RuneScape arrive. It serves as the tutorial for the game for those who select the "New" or "Returner" option during character creation. It is not possible to return to the island after completing the tutorial until the sunken version after Beneath Cursed Tides. During this quest we see how the island has changed by being submerged in water

Tutorial Island was released in the update of 24 September 2002.[1] All new players had to navigate through the various tutorials on the island before being transported to Lumbridge. Tutorial Island was added to the world map on 4 March 2003.[2]

Even though Tutorial Island was inaccessible, it remained part of the world map. On 28th November 2012, it was removed from the map to make space for a revamped Wizards' Tower. During the Beneath Cursed Tides quest, released on 14 December 2015, players visit an underwater version of the island. It is revealed that the island was a former school for adventurers which has since been placed under a terrible curse, which the adventurer helps to counter successfully.

On 14 May 2018, Tutorial Island was reintroduced in a revamped form as the tutorial for RuneScape, replacing the Ashdale Tutorial.

Before starting the tutorial, players must create a new character. They are able to customise their hairstyle, beard and clothing. Players are then asked if they are a new, returning, or recent player of the game. Selecting any of the first two options will transport the player to Tutorial Island.

An interface at the top left of the screen indicates what stage of the tutorial the player is on, and their total progress through it. First, players should speak to Reginald by left-clicking him. He explains basic mechanics of the game, including how to move the player character and the camera. Next, players are told to speak to the survival expert. She teaches players the basics about Woodcutting, Firemaking, Fishing and Cooking.

After speaking to the survival expert, players should head through the gate to the west by clicking on it. Then, they should follow the path to the master chef, who teaches them more about Cooking, including how to make bread. Players should then continue out of the door and down the path to the quest guide, who will explain a little about quests and direct the player to go down the ladder to the mine underneath the island.

In the mine, players come across the mining instructor who teaches them about Mining and Smithing. The player is required to smelt a bronze bar, and then smith it into a bronze dagger. After, they proceed through the gate to the east and speak to the combat instructor, who teaches them how to kill a rat. Finally, they should head back up to the island using the ladder on the northern part of the cave.

Continuing down the path to the south, players meet the financial advisor inside the only bank on the island. He explains how to access the bank and the basic ways of making money in RuneScape. Afterwards, he directs players to the nearby church to speak to the prayer instructor, who tells the player about Prayer and the Friends and Ignore lists. Finally, players should continue out of the door and down the path to the magic instructor, who explains about Magic and the Lodestone Network.

The player must then teleport to the mainland through the Lodestone Network. The lodestone for Burthorpe will be unlocked automatically when completing the tutorial.

The following music tracks are used on Tutorial Island:

Note: If a player had started playing before sounds were added in RuneScape 2, "Newbie Melody" is automatically unlocked.

Free-to-play will have the following tracks unlocked after completing Tutorial Island and appearing in Lumbridge. 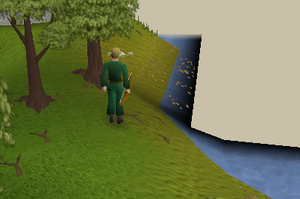 The original Tutorial Island was surrounded by Unknown.