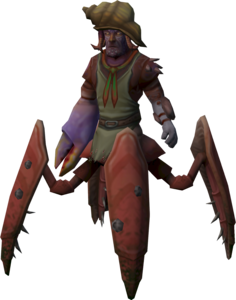 The Master chef (real name is Lev) is the third non-player character players meet on Tutorial Island. He teaches new players how to cook more like a real chef.

Until the point in the tutorial when new players meet the master chef, the only thing they would have cooked is shrimps on a log fire. He teaches new players how to bake bread by combining a flour with water to make bread dough, and then baking it in a range.

When Tutorial Island sank, he disappeared. He returned during Beneath Cursed Tides when it was revealed that all inhabitants of the island were cursed and morphed into sea creatures. During the quest the player has to do his task and the tasks of other instructors to break their curse.