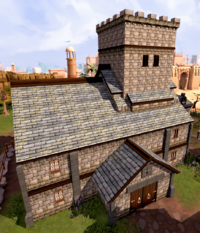 The Lumbridge Church is a more than 200 year old[1] Saradominist church in south-east Lumbridge, across from the Lumbridge Castle. Father Aereck is the priest and caretaker of the church, and is also the starting point for Restless Ghost. Players can also complete several of the Lumbridge and Draynor Tasks there.

The ground floor[UK]1st floor[US] is the main part of the building and is also the location of Father Aereck. Here, players can pray at the altar and regain their Prayer points. While under the Prayer Mystic Might, praying at the alter will complete a Hard Task from the Lumbridge and Draynor task. The organ can also be played, which is one of only two organs available to non-members. When played, two skeleton hands will appear and play a music track. This count as one of the beginner Lumbridge and Draynor Tasks.

While there is nothing on the 1st floor[UK]2nd floor[US], on the 2nd floor[UK]3rd floor[US] players can ring the church bell which is another beginner Lumbridge and Draynor task.