Roddeck Placehold is an elderly resident of Lumbridge, found in the building directly north of the musician. He tried to raise a dragon named Sottlepot, but it got out of control and was supposedly killed by Sir Vant of Falador and an adventurer.

With his modest personality it's easy to forget that Roddeck almost brought terrible ruin to Lumbridge by keeping a pet dragon. Whether he is mending his ways or simply being an eccentric busybody, Roddeck is interesting to talk to and a good source of advice.

He was the leader of the mysterious group that ran the Cryptic Clue Fest for Thanksgiving 2009. He states that he "had too much time on his hands" and devised a series of clues for adventurers to follow. The "links in the chain" were caused by other NPCs reading his notes, forcing him to enlighten them to his plot.

Transcripts Roddeck is the author or co-author of: 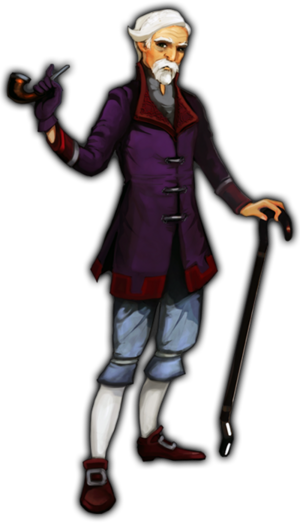