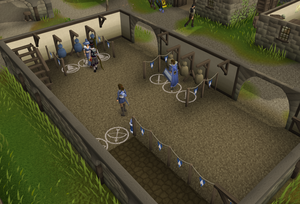 The Combat instructors were tutors that gave instructions for lower-level players on how to use combat. The three tutors were Mikasi, the Magic tutor; Nemarti, the Ranged tutor; and Harlan, the Melee tutor (who also sells the Defence cape). They could be found at Lumbridge.

With the release of the combat academy, Mikasi and Nemarti were removed, and Harlan was relocated to slightly north west of the academy. The building they were in was also removed.

After the graphical update in April, the combat tutors were relocated inside the building with new feature. Inside the building, there were a few targets: magic dummies for testing spells on, melee dummies for attacking with melee, and targets to aim arrows at. Mikasi used to supply runes, Nemarti could supply arrows, and Harlan would lend the player a sword and shield. Mikasi and Nemarti only gave out supplies every half an hour; however, after the tutorial update in September 2009, the tutors no longer gave free items; they were spread in different locations. Throughout various shops, especially in Lumbridge, the clerks provide various free items to help new players. A bronze dagger can be received from the Lumbridge general store, air and mind runes can be collected from Aubury's shop, and bronze arrows and regular bows can be found in Lowe's shop, all free to be taken. Since then, the popularity of the hall has decreased; people rarely trained at the archery targets since they needed bronze arrows to train but no arrows were provided, along with the fact that the targets gave very little experience.

The building was popular when it was first introduced, but after a while, most players neglected the area because they were training instead on monsters more for their skill level.

There was a first floor for the building with three rooms for each of the tutors, this was probably just for decoration like the training shields and swords that were near the walls.