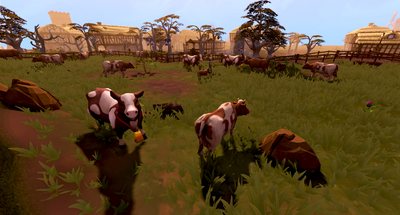 The Lumbridge cow field is a field containing level 4 cows and level 1 cow calves. The field also has dairy cows which can be milked if you have a bucket in your inventory. There is also a prized dairy cow, which is milked in the Cook's Assistant quest. Gillie Groats is the owner of the cows, and her father Seth Groats owns a chicken coop, just west of the northern end of the cow field. This is a good place to train either Magic or Ranged at a low combat level due to the fact that you can safely kill them from the other side of the fence, and run in to loot between kills. There are 2 cow fields in Lumbridge: north of the windmill and east of the town.