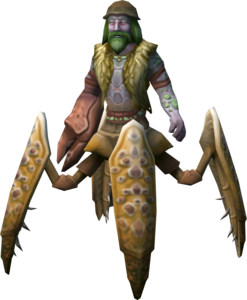 The Mining instructor on Tutorial Island (named Dezzick) is the fifth non-player character that a player comes across. He informs players about Mining and Smithing skills.

Dezzick is a miner by trade. He is one of the more friendly Tutorial Island tutors, unlike his neighbour Vannaka. He is skilled at Mining and also knows how to smith many different kinds of weapons.

He disappeared when Tutorial Island sank. He returned during Beneath Cursed Tides when it was revealed that all inhabitants of the island were cursed and morphed into sea creatures. During the quest the player has to do his task and the tasks of other instructors to break their curse.