From the RuneScape Wiki, the wiki for all things RuneScape
Jump to: navigation, search
Loading...
Unstable FoundationsLearning the Ropes

Sir Vant is a White Knight from Falador. He and his squire were featured in the Unstable Foundations tutorial, where they fought Roddeck's escaped pet Dragon. Sir Vant had the player aid him in defeating the dragon after his squire was killed by a blast of the dragon's fire. The player had to do many tasks and small things to help out Sir Vant after the death of his squire in order to complete the tutorial.

Players who completed Unstable Foundations can find him on the ground floor[UK]1st floor[US] of Falador Castle. 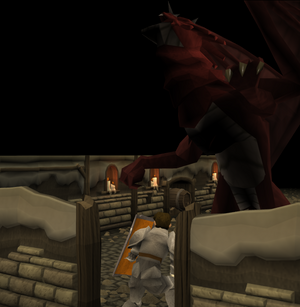 Sir Vant was called upon by Roddeck, a well-off resident of the Misthalanian township Lumbridge. Roddeck had kept a baby dragon as a pet, but it grew up quickly and soon overpowered him and took over the basement of his house. Roddeck hid in a cupboard and sent an S.O.S to Falador, requesting help.

Sir Vant and his Squire turned up soon, but they found it difficult to overcome the Dragon. When an adventurer eventually arrived and intervened, Vant's Squire was killed by a blast of dragon fire which also incinerated the ladder leading down into the cellar. After this, the adventurer is asked to help with Sir Vant's slaying of the dragon by placing drugged meat in one of its food bowl and ultimately killing it, collapsing the ceiling of the cellar. After saving Roddeck, Sir Vant returned to Falador Castle.

Sir Vant fighting the dragon in Learning the Ropes.

Sir Vant originally appeared in the Learning the Ropes tutorial, which was released along with the release of RuneScape HD but taken from the game shortly after being made. In this tutorial, Sir Vant's appearance was slightly altered; his hair was blonde and he had no beard.

Roddeck had not been released into the game yet, but Sir Vant still fought a Dragon, though this one was green instead of red, three-headed, and aided by a Chaos druid. The player was required to do many tasks for Sir Vant, such as getting him food to restore his health and killing the Chaos Druid that spurred on the Dragon. At the end of the quest, the player would receive two 250 experience lamps which granted experience to any skill used while helping Sir Vant (Attack, Strength, Defence, Constitution, Ranged, Magic, Mining, Smithing, Fishing, Cooking, Firemaking, Woodcutting, or Prayer).

Players who had created an account before Unstable Foundations was released or after it was removed could visit this version of Sir Vant by going down a ladder in Roddeck's house. Players who said that they would help him fight the dragon received the two 250 experience antique lamps. Players who created an account while Unstable Foundations was still in-game couldn't visit the old Sir Vant however, as upon trying to climb the ladder, they would receive a message stating that The lower end of the ladder has been completely destroyed. You can't climb down it. With the release of RuneScape 3 and the Battle of Lumbridge, players no longer have the option to climb down the trapdoor. 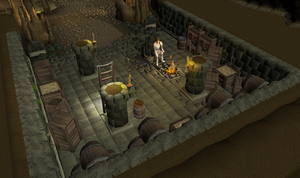 Sir Vant waiting for orders from Falador to slay the dragon