From the RuneScape Wiki, the wiki for all things RuneScape
(Redirected from Tutorial)
Jump to navigation Jump to search

New players who enter RuneScape have to complete a tutorial, which explains the basics of the game. So far, there have been six versions of the tutorial; the current version actively in use is Tutorial Island. Currently, when a new player creates their account, they are asked whether they have played very recently, have never played before, or have played before but not in a while. If the second or third option is chosen, players will be brought to Tutorial Island, and if the first option is chosen, they will be sent straight to Taverley, skipping the tutorial altogether. 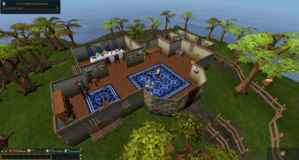 A player on Tutorial Island

The first ever tutorial, Tutorial Island, released 24 September 2002, was the longest of any tutorials. The quest showed the player around the island, teaching them about the basic skills and interfaces along the way. The Tutorial Island landmass remained on Gielinor long after the removal of the tutorial.

Although it was believed to be used for new content in the future, it was eventually removed from the game world with the Wizards' Tower update during November 2012. However the island is now accessible again by starting the quest, Beneath Cursed Tides.

On 23 March 2018, in a hidden update, a graphically touched up and slightly tweaked tutorial island that does not appear on the world map started being used for some new players. As of 14 May 2018, the updated tutorial island fully replaced the Ashdale Tutorial. 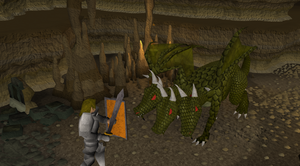 On 14 July 2008, Tutorial Island was replaced with a new tutorial, Learning the Ropes. The quest centred around a White Knight, Sir Vant, who was having trouble with a three-headed green dragon that was causing disruption in the cellar under Lumbridge. Sir Vant could not defeat the dragon, and it got away. He then tells you to head up to the surface, where you walk around a copy of Lumbridge and learn about certain skills and interfaces.

The percentage of people completing this tutorial was much lower than before, so Jagex removed it, saying they will recreate it in time, making it much better. Tutorial Island then again took place as RuneScape's tutorial from September 2008 onwards. 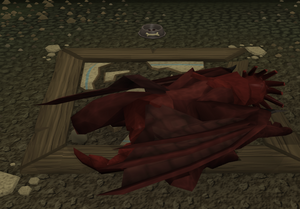 The dragon, sound asleep under a soon-to-be caved-in roof

The updates on 17 September 2009 gave a final goodbye to Tutorial Island and implemented Unstable Foundations. The quest was a remake of the previous tutorial, Learning the Ropes, and was remade to focus on the more important things, like controls, so the player could then learn more if they want to with their new advisor, Roddeck.

In the quest, the player must help a White Knight named Sir Vant to kill a dragon who is preventing him from escaping the Lumbridge cellar. The player feeds the dragon some drugged meat, which makes it fall asleep under a ceiling held up by two wooden posts. The player and Sir Vant both attach an oily fuse to the wooden posts, then light up, which causes the ceiling to cave in on the dragon, thus killing it. The player must either mine or woodcut their way out.

The player is rewarded 1 Quest point, level 4 Mining/Woodcutting (depends on which way you escaped the cellar), the ability to chat freely, the ability to explore RuneScape, and the services of an advisor.

May 2011 removed the Unstable Foundations quest and the new tutorial was centred around the Introductory tasks. Players had to speak to Explorer Jack in Lumbridge to start the tutorial. This included The Blood Pact quest.

Beginning January 2012, the new Troll Warzone tutorial was used. This included an overhaul to the Taverley and Burthorpe area, with the release of a new novice quest Let Them Eat Pie and reworks of Druidic Ritual, Wolf Whistle, and Death Plateau. In November 2013, Troll Warzone still remained largely available for players to experience after the release of the Ashdale tutorial. 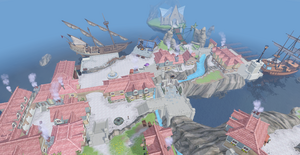 The town of Ashdale

In May 2018, the Ashdale tutorial was replaced with a reworked version of Tutorial Island. 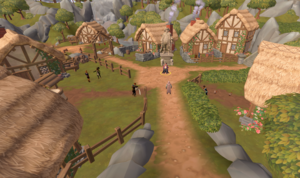 From 22 February 2021, Davendale was added as a new tutorial area as an A/B test for mobile players only. As part of the tutorial, the player has to help ward off the Troll invasion by supplying the village with fish or help killing the invaders.

This information has been compiled as part of the update history project. Some updates may not be included - see here for how to help out!
Retrieved from ‘https://runescape.wiki/w/Tutorials?oldid=35686664’
Categories:
Hidden category: