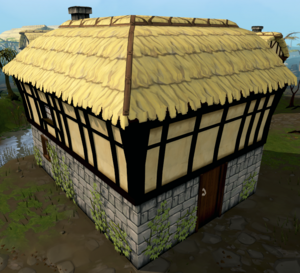 The Lumbridge Refugee Shelter is a building found in Lumbridge, located just east of the River Lum. The building originally belonged to a man known as Lachtopher, but the house was destroyed by goblins, and was later repaired using money from Duke Horacio's treasury after the results of a vote by adventurers dictated that it be repaired to act as a shelter for refugees whose houses were destroyed in the Battle of Lumbridge.

It previously housed a Zamorakian herbalist, his wife and his son downstairs, along with a Saradominist priest, with his wife and daughter upstairs. The Saradominists and Zamorakians do not get along, viewing each other with suspicion and hatred, but tolerate each others presence due to their respect for the duke.

The two families moved again since the Summer Beach Party returned in 2016, this time living separately; the Saradominists above Explorer Jack, and the Zamorakians at the Thieves' Guild house.