A player using a Gnomecopter

Gnomecopter as seen in Armies of Gielinor

Gnomecopter Tours was a special system which was released in the Gnomecopters update on 31 March 2008[1] and could be accessed by both members and non-members. The main point of the Gnomecopters was to show free players some of the popular members features such as Castle Wars, Pest Control, Hunting, and the Burthorpe Games Room. It could take riders from the cow field in Lumbridge to various members-only places, including:

At the date of release, this area was filled with people. A few weeks after the release, the popularity died down, due to loss of interest. Based on the Patch Notes released on 25 March 2009, the Gnomecopters were removed from the game and replaced by Beefy Bill and Farquie the Cleaner, as Jagex no longer wished to advertise members content on free-to-play worlds. 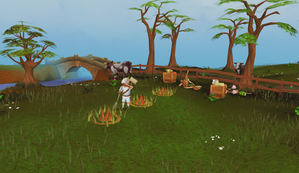 Once a popular place, now a cowpen.

The area is located east of Draynor Manor and north of Lumbridge windmill. There is a sign like the ones you see on the ride just by Lumbridge Windmill. You enter the area through a cow pasture and then go to the back where Gnomecopters are spread out. Players must first speak to Hieronymus Avlafrim, a gnome sitting at the east side, to get the permission of using the Gnomecopters. Then, they must speak to another gnome, Sasquine Huburns, who sits in the middle of the area, to get a ticket to take a ride.

Players can trade Hieronymus Avlafrim items like a general store. He stocks the usual general store as well as other things like redberries, jugs of water and spinach rolls. Many players use this shop for redberries because they are cheaper than Wydin's food store in Port Sarim and there is an infinite supply unlike redberry bushes and the food shops. This is also the only general store in free play areas to sell jugs with water already in them (free players often use this method to speed up soft clay making, as they do not need to fill the jugs).

To the west, there used be some deposit bins, where you could deposit items into the bank, provided you have room. Together with the nearby cow farm, it was a good cowhide hunting area. 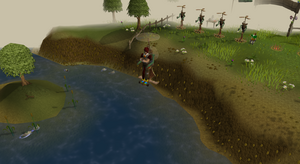 Taking off from the Gnomecopter Tours. 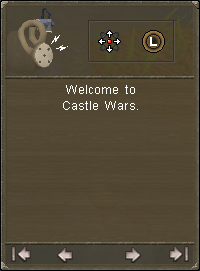 Players must be 5'6" tall to ride the Gnomecopters, but this is not a problem, since all players are tall adult humans. To take a ride, players must first speak to Sasquine Huburns in the centre of the row of Gnomecopters to get a ticket. In order to take a ride, all capes, helmets (except Bomber cap and Cap and goggles), weapons, and shields must be unequipped.

During the ride, players can view and chat with other players riding a Gnomecopter in that area. None of the areas that may be visited are an actual members area. Although characters that appear to be members appear in the various areas, they are not actual members, or even players. They are computer NPCs which have been programmed to complete certain actions and say certain phrases. Thus, visitors are merely viewing a simulation of a member's area, and not an actual P2P world. Viewing players are restricted as to the places they may go within each area, and cannot pickpocket, talk or attack the locals, or otherwise interact with them in any way. Viewers are also restricted from unlocking any music for the places they visit, although they may listen to the background music while in each area. All interfaces are disabled, except for the Friends and Ignore lists, Clan chat, and the Options menu. Players can activate run mode to make the gnomecopter fly faster, but it will not deplete their energy.

The players' Inventory interface is not removed, but it only displays the Gnomecopter controls along with various information about the current area:

Certain places in the area you can only go to when your gnomecopter is set to manual riding. Signposts are located in each area which viewers may click to see extended information about an area or feature.

In the Gnomecopter rides, running characters in the members' area only seem to run, but are actually moving at walking speed. All spoken phrases are actually quick chat.