From the RuneScape Wiki, the wiki for all things RuneScape
Jump to navigation Jump to search
The Old School RuneScape Wiki also has an article on: osrsw:Ruantun

Ruantun is a vampyre located next to the anvil in Draynor Sewers, on the ruins of what used to be a small house. He plays a minor role in the Desert Treasure quest, where he willingly assists you in the process of summoning Dessous by crafting a silver pot.

He only appears in member's worlds, as Desert Treasure is a member's quest. As such, free-to-play players have no way to talk to him.

Although not much is known about his past, it is revealed that he once worked as an assistant to Count Draynor many years ago, helping him with unspecified experiments.[1] 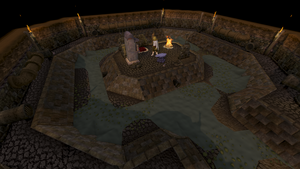 Ruantun lives in the sewers.