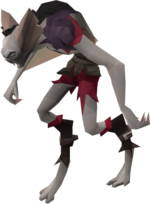 Angry Juvinates were one of three possible results when using a dose of Guthix balance on a Held Juvinate. They increased their life points and combat levels but their max hit remained the same. They also lost their immunity to normal weapons so if a player brought a secondary weapon with them while Temple Trekking they could switch to it and finish off the vampyre. It was recommended if a player was travelling with a medium or hard class follower that they focused on killing the remaining juvinates before killing the angry juvinate. All vampyres become angry vampyres now.