From the RuneScape Wiki, the wiki for all things RuneScape
Jump to navigation Jump to search
The Old School RuneScape Wiki also has an article on: osrsw:Malak

Lord Malak is a vampyre noble who governs the village of Canifis for House Drakan.[1] He can be found in the Hair of the Dog Inn, surveying the area from the doorway. The werewolves hate and fear him and he is said to corrupt the very earth he walks upon.

According to legend, Malak helped found Morytania during the God Wars. Even for a vampyre, he is very powerful, able to manipulate shadows to materialise, forming a throne for example, to sublimate into mist at will. His very presence affects the minds and bodies of those around him, forcing them to kneel before him and to agree with what he says.[1] Being one of the four guardians of the Diamonds of Azzanadra, he plays an important role in the quest Desert Treasure.

Malak's origins are unknown. Given his power and status, it is very possible he is one of the original vampyres from Vampyrium, but this is not the sole possibility. It is said that he participated in Lord Drakan's invasion of Hallowvale during the God Wars, but this is also uncertain.[1]

At the end of the God Wars, the Mahjarrat Azzanadra, leader of the remaining Zarosians was imprisoned by Saradominist and Zamorakian forces in Jaldraocht Pyramid in the Kharidian Desert. His essence was bound to four diamonds representing the ancient elements. These four diamonds were each given to a Zamorakian guardian for safekeeping to ensure that the Champion of Zaros would not be able to escape.[2] Malak was one of the four guardians,[source needed] appropriately that of the blood diamond. It is said that he absorbed some of its energy, becoming more powerful in the process.[3]

After the God Wars, Malak would remain in Morytania as a loyal servant of Drakan's. At some point after the foundation of Canifis in 23 of the Fifth Age, 'Master Malak' became the village's vampyric overseer and the leader of the werewolf race, which he describes as "idiots" living in a "pathetic excuse for a village" and a "wolfen cesspit." He held the highest authority in the village, collected blood tithes, would conduct the bloodings of young werewolves and was the one to select unfortunate werewolves to be taken to the Sanguinesti Region, few of whom ever returned alive.[1]

After the Midsummer Festival of 165 of the Fifth Age, King Roald Remanis III sent an embassy to Morytania consisting of Kara-Meir, Sir Theodore, Castimir, Arisha, Gar'rth, Albertus Black, Lord Despaard, Doric and Gideon Gleeman to parlay with Lord Drakan about the Wyrd's attacks. At Paterdomus, Drezel and Reldo administered the blood mark to them to ensure safe passage in Morytania so long as they would not attack anyone. When Kara tested the blood mark, she was attacked by a ravenous vampyre, a savage beast who ignored all law. The next day, however, Malak had it killed, leaving a message for the embassy stating that he agreed to meet them in Canifis.

The embassy said goodbye to Reldo, Drezel, Lord William and Lord Ruthven in the temple and ventured into Morytania, where they were met by the werewolf Imre and his companions, who would escort them to the village. They lost most of their mounts when a ghast attacked, forcing them to walk. The embassy was able to stay in the Hair of the Dog, which Roavar had reserved for them on Malak's orders.

The next day, Malak arrived shortly after the group saw Pia, Jack and Vanstrom Klause in a cage, to be eaten by the werewolves. He stated that the three could not be saved, despite Kara's pleas, and remarked that the werewolves would not trade anything for fresh food. Lord Despaard announced King Roald's demands that Lord Drakan return the people taken by the Wyrd and that the creature itself be handed over to Misthalin to be punished. Malak then left to inform his master of these terms in Castle Drakan, ordering the embassy to remain in Canifis in the meantime.

After he left, however, the Myreque attacked the village in order to free Vanstrom, starting a large fire.

A few weeks later, Tenebra double-crossed Vanescula Drakan and stabbed her in her stomach using the Sunspear, a blisterwood dagger. Grievously wounded, she then fell off the balcony of Castle Drakan and injured one of her wings. She landed somewhere in the swamp below, where Malak found her. To her great annoyance, as she would be relying on him and in his debt, the vampyre lord decided to help her.

Shortly before the Second Battle of the Salve began, Malak visited Gar'rth and told him to come with him, nearly killing his werewolf servant Georgi with blood magic when he cautioned his master. Malak brought Gar'rth to Vanescula in a clearing, where she handed him the Sunspear and told him to kill Tenebra only on the western side of the River Salve. He then showed Gar'rth his dozens of siblings, all warped and deformed, horrific creatures, before leaving.

When the battle was nearing its end and the River Salve had been strengthened by rune essence, Malak approached the bridge to Paterdomus from the Morytanian side with Vanescula leaning on his shoulder. The latter ignored the pleas of the weakening Tenebra, who had lost control over his army of undead, and stated that she would not and could not order his army to invade the west. She telepathically instructed Kara-Meir to kill Tenebra with the Sunspear, then left with Malak. The Black Prince attempted to defend himself from his attackers, but was easily dispatched by Castimir, using Albertus Black's phosphorous, and Kara, who pierced his skull with the dagger.

Malak then presumably returned to his duties in Canifis. 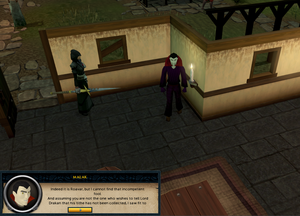 Malak collects the tithes from Roavar.

At some point in 169, Malak went to Canifis to collect the blood tithes, unable to find Gadderanks, who normally performed this duty. While at the Hair of the Dog, he was visited by an adventurer who was collecting the four Diamonds of Azzanadra to release the Mahjarrat. He noticed the human and demanded to know why they were in Canifis, threatening to bring them to Lord Drakan and sensing that they had slain his brother Count Draynor. The adventurer revealed their intentions to obtain the diamond. Seeing an opportunity, the vampyre informed them that Dessous, a minor vampyre noble, was the owner of the diamond and offered to teach them how to kill him, which they accepted. He agreed to help the adventurer, for he would have one rival less if Dessous were slain and he would be able to claim his land. Malak instructed them to have Draynor's assistant Ruantun smith them a silver pot, get it blessed by the High Priest of Entrana, add some fresh blood, crushed garlic and spices and then use it to lure Dessous out of his tomb.

The adventurer did so, albeit with the painful realisation that Malak used their own blood. They successfully slew Dessous in his graveyard, but were shocked to realise he did not have the diamond. Returning to Malak, they were informed that Malak himself owned the diamond. As a token of gratitude, the vampyre lord handed the diamond he had guarded for centuries over to the adventurer but confiscated the silver pot, warning them that they were lucky to be left alive.