From the RuneScape Wiki, the wiki for all things RuneScape
Jump to: navigation, search
The Old School RuneScape Wiki also has an article on: osrsw:Damis 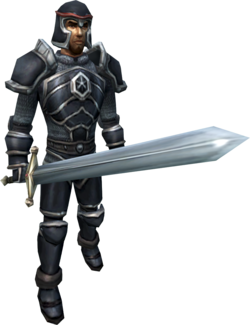 Damis, Warrior of Darkness, is one of the four guardians of the Diamonds of Azzanadra, fought during the Desert Treasure quest in his Shadow Dungeon. He has two forms, both being level 86. Damis drops the shadow diamond. After his first form is defeated, he will remove his armour and continue fighting, this time shouting various taunts.

Damis's second form has the ability to drain the prayer points, which he does simply by being in melee range. Stunning him stops him from attacking but does not prevent prayer drain. It is possible to bring a familiar to help fight him. Usage of Protect from Melee is strongly advised, as Damis has a maximum hit of 892 and attacks incredibly fast.

Damis is fightable along with Fareed, Kamil and Dessous as a class B boss monster in the Dominion Tower minigame after Desert Treasure. See Dominion Tower/Desert bosses strategy for a guide on how to defeat the combined four bosses.

Known as Titus Damis, Titus lived during the height of the Zarosian Empire during the Second Age. He found employment in the empire as a praetorian guard, eventually becoming one Praetor Trindine's personal guard. Trindine thought highly of Titus, seeing him as a man of integrity and honour.[1] Titus in turn enjoyed his employment, believing that his life had purpose.

Following Zamorak's betrayal, Titus accompanied Azzanadra and Trindine to Kharid-et and was stationed there with the rest of his comrades. He partook in a scouting expedition on some icyene, with his scouts soon discovering an Avernic war party. The scouts were able to lure both parties together [2] in a skirmish that resulted in the Avernics winning. They then harassed the Avernic war party marching towards the fort, with little success [3].

He later partook in the fort's defence, but feared that all would be lost soon as supplies were dwindling. Trindine then tasked him with a black diamond (the shadow diamond) to bring to Azzanadra, and to evacuate the fort's civilians. Although conflicted in his duty to fight alongside his comrades and protecting the civilians, he ultimately chose to obey Trindine's orders. [4]

The evacuation was mostly successful, although one scout had died near the exit. [5] This exit was the waterfall near the present-day Dominion Tower, and the refugees made their way to their destination on the western shore. This settlement was likely to be the present-day Bandit Camp, given the inhabitants' worship of Zaros.

Once the camp was set up, Titus temporarily oversaw the camp's safety, knowing that the encroaching desert would be the only threat. Once everything was complete, he departed from the camp, to fulfil the second part of his orders; however, the shadow within the diamond slowly began corrupting him, as Trindine had feared. He cursed Zamorak for his traitorous acts, and Azzanadra for not assisting in the defence of Kharid-et. [6]

Regardless, he was still loyal to the Zarosians for the time being, was able to find Azzanadra and became his personal guard. Eventually, Lowerniel Drakan arrived to demand Azzanadra's fealty to Zamorak. When Azzanadra refused to acknowledge Zaros' defeat, Titus attacked Drakan using blood magic, despite Azzanadra's instructions, and was knocked out in the skirmish. When he regained his consciousness after Azzanadra teleported away and the rest of his personal guard had been killed by Drakan, the vampyre ordered him to run, and he complied.[7]

Although it is not known how Titus had managed to escape Lowerniel, it is likely the shadow diamond had played a role in his escape. He soon became a Zamorakian follower, entrusted with the shadow diamond. He was soon regarded as a fearsome warrior, invisible from prying eyes. He would be undisturbed for thousands of years, until the year 169 of the Fifth Age when the adventurer discovered his lair with the ring of visibility. He sensed their presence and threatened them with death, but they were unfazed and soon found him in a large cavern. Although he put up a significant fight against the adventurer, he was ultimately slain, and the adventurer retrieved his diamond. 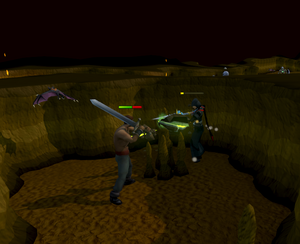 A safespot to the northeast

Since Damis' weakness is earth spells, it is advised to use the strongest earth spell the player is capable of casting against him and wearing their best set of magic equipment. Several safespots exist and are recommended for players who are planning on using magic or ranged.

In his first form, Damis simply attacks with melee. Players should not have much difficulty defeating this form and may wish to keep their distance with the use of Impact/Deep Impact and Bind, Snare or Entangle if they do not wish to use a safespot.

Once killed in his first form, Damis exclaims "I am Damis, invincible Lord of the Shadows", changing his appearance and entering his second form in which he becomes considerably stronger. In his second form he acquires the ability to drain the player's prayer points by about 30-50 each time he hits even if he hits zero.

For the most convenient safespot, after he appears, run to the north to the end of the passage and run behind the stalagmite. It should be now possible to attack him from a distance without him being able to hit back.

I will crush you utterly!

Hah! I fear not your feeble power.

You are no match for my power.

Taste my blade and feel my wrath.

You will regret ever coming here.