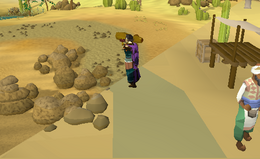 An example of High detail compared to minimum detail

Jagex has stated that RuneScape High Detail spent about eighteen months in development. According to the first development diary, Jagex first felt that Java, the platform on which RuneScape is implemented, was mature enough to support a hardware-rendered (rendered by users' graphics cards, as opposed to software) version in or around 2006. At the start of development, about 30 artists were hired in order to revamp every aspect of the game.[1]

The first sign that players had that a major update was coming was on 6 May 2008, when Jagex released the "Send us your Specs!" update, asking players to run a Java applet that would send Jagex their hardware and software specifications. Soon after, on 8 May, it was revealed with another update that the development of a new detail level was under way, and two images comparing the old and current graphics were posted. This was followed by a similar post on 16 May, followed by a two-part Development Diary released on 29 May and 16 June. Along with the second part of the diary, the required system specifications to use the new detail level were posted.[2]

During late June, Jagex stopped all other updates to the game in order to focus on the graphics overhaul, which was said to be due out in "early July".[3] The beta was then released as an update on 1 July (which was only available to members), along with an extensive website update. On 14 July, the update was released to free-to-play players as well. 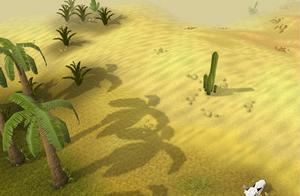 As it would in reality, the cactus shadow falls differently to the palm trees, due to the changing gradient of the slope.

By using a hardware accelerated 3D API, OpenGL, Jagex was able to implement more detailed textures, realistic lighting, shadows, and an optional fullscreen mode. Due to the size of the tasks required, this update spent about a year and a half in development, with nearly every texture, map square, character, etc. receiving a more detailed look.[1]

According to the development diaries for this update, the largest change was adding textures to every object in the game world. In the prior detail modes, there were few textures, as they required more memory, which Jagex tried to conserve; instead, shading was used to tell objects apart, as it required a fraction of the system resources. This is the most noticeable change for many players, as it results in a vast overall improvement of the game's look and feel.[1]

Blending between the various textures has also been improved. In older detail levels, for example, paths had sharp, easily distinguishable edges; in the new mode, they blend in well with the surrounding terrain. This also applies to varying soil textures, as well as many other elements.[1]

Additionally, as an unexplained change, gradients (transitions between two different colours) have been vastly improved. Previously there had to be bands of rough colour transitions in order to roughly resemble an actual gradient. In HD, however, they have been converted into actual gradients instead of just steps of colour.

Shadows and fog have also been added with the update. Above ground level, most objects, including foliage and buildings, cast shadows that are consistent with the same position of the sun. In addition, dynamic shadows for objects such as players and NPCs can also be added with a graphical setting. A fog has replaced the previous "blackness" that was shown on the game screen when players looked at areas of the map that were not yet loaded. The fog's colour and thickness can also change depending on the player's position on the map.[1]

Unlike the underground areas and dungeons before the update, with the new detail mode, these areas do not have the same amount of light as normal. Instead, they are lit almost exclusively by torches and other such light sources, which have been present since before the update, but previously had no effect in terms of lighting. This means that dungeons are effectively darker than they were before.[source needed] Some areas such as the Lumbridge swamp caves and the Maze random event are far darker as a result.

Finally, the water in the game world has also been improved. Prior to the update, bodies of water were shown as just another texture, similar to land except impassable. Now, water is translucent, and has a bottom that is visible from coastal areas. This required coding in an extra "level" to each map square in order to show the bottom with realism, an extensive task.[source needed]

Upon choosing to login into the game, the screen for RuneScape High Detail cycles through different locations that players can travel to within the RuneScape world, Gielinor. The cutscene-like "preview" shows seventeen locations in perspective view; with views from the air, zooming past the area in real-time, however, there are no occurrences of players on the screen.

An optional feature that was released with RuneScape High Detail (available to members' only) is the ability to play the game on the entire screen, rather than the low-resolution game applet from before. (The applet's size allows the game to be played on an 800x600 resolution.) The resolution used is adjustable, depending on the player's monitor, allowing for support for several different sizes and aspect ratios at the player's option.

On 5 August 2008, RuneScape was updated to allow the applet (in High Detail) to become the full size of the window (whether smaller or larger than the fixed applet) for pay-to-play and free-to-play players. This allows for playing RuneScape in any size the players want and for using fullscreen with the ad still present. To make the screen as big as possible, the browser window must be made as big as possible. To maximise a window to its "Fullscreen" mode, select the browser (not the RuneScape applet) and push F11. In some browsers, this makes the browser cover all of the computer screen and show nothing except for the page (Internet Explorer 7+, for instance). Unlike the fullscreen feature, this feature is available to both free players and paid members.

Just before the initial announcement of the updates, on 6 June 2008, Jagex posted the "Send us your Specs!" update to obtain information on hardware specifications of the RuneScape players. According to Jagex, this information was to be used to determine how far they could push the updates; however, the update was nearly complete by the time of this announcement, so it may not have had a large impact.

In the subsequent Development Diary and System Specifications update dated 16 June 2008, Jagex stated that the system requirements to be able to play in the new detail mode are as follows[2]:

Soon after the update, many players complained of the severe lag and, as a result, all the worlds temporarily went offline. About 30 minutes later, select worlds came back online. It is unknown what the intent of this downtime was.

There were many complaints after the update as well as a small number of riots, like the Graphics Riot. One of the most prominent issues noticed by most players was a glitch causing a character to appear bald upon removing their headgear. This glitch still persists with certain headgear. 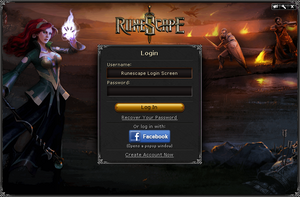 The last updated version of the RuneScape logo, November 2011. This is before it would get updated again when RuneScape 3 was released in 2013.