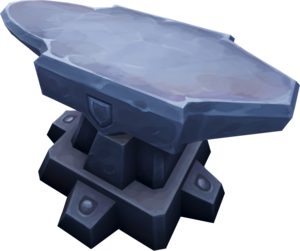 A player using an anvil

An anvil is used to smith items through the Smithing skill. An anvil can be used to smith items by using a bar on an anvil while the player has a hammer in their inventory or tool belt, and then a selection screen will come up. After 4 October 2011 update, it is possible to use anvils by left-clicking on them once. Right-clicking now also reveals a 'smith' option.

The most convenient anvil may be that in Varrock, since it is directly opposite a bank as well as being near the Grand Exchange. On 24 June 2010, Lumbridge got an anvil right next to the smithing furnace, arguably making it the most convenient anvil in the game, certainly for those who don't want to bank then travel to Varrock just to smith. It is advised to use the bank chest at the Combat Academy to the west of the smithing furnace.

There is no competition for anvils (since multiple players can use an anvil concurrently.)

There are several unusual anvils in RuneScape. Included among these are an experimental anvil that players use in The Tourist Trap to help make a prototype dart, the two tempered anvils on Kethsi which are used to smith bane projectiles after the Ritual of the Mahjarrat quest, and the barbarian anvil in Otto's Grotto, used to smith spears and hastae.