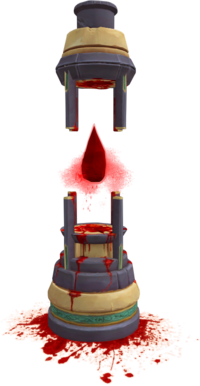 The Blood Crystal made from the very essence of Lady Drakan.

Lady Drakan was the vampyre matriarch of House Drakan on Vampyrium and mother to Lowerniel, Vanescula, Ranis and Draynor.[1] She lived through her clan's rise to the very top of the vampyric society, whose foundation was laid aeons ago by Zaros. When Zaros returned to Vampyrium after his discovery of Gielinor and the killing of Loarnab, he requested that the vampyres joined him; and most did. Since her children left Vampyrium for Gielinor, she took her son Lowerniel's place and became the ruler of the vampyre world. Over the years she became a bloody and corpulent ruler like Hostilius and abandoned the loyalty to Zaros. When Zaros once more returned to Vampyrium, he was disappointed to see her and her people having abandoned his teachings, as punishment he killed her and siphoned all her powers to create the Blood crystal, that he used to create the Nihil and later bestowed to Nex.[1]