From the RuneScape Wiki, the wiki for all things RuneScape
Jump to: navigation, search
The Old School RuneScape Wiki also has an article on: osrsw:Ice Path 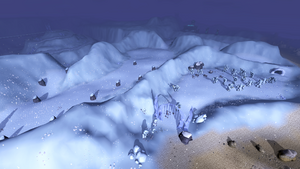 The troll child near the Ice Gate. 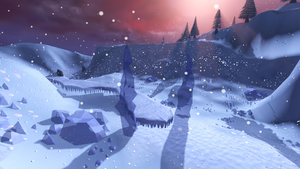 The Ice Path is a path ascending up a mountain, in the Troll Country region of Gielinor. It has no purpose other than the part it plays during the ice diamond section of the Desert Treasure quest. It is extremely dangerous, and players are advised not to enter unless prepared. The entrance to the path is barred with a gate and players may only pass if they have completed the Desert Treasure quest, or if they supply the troll child at the entrance with something sweet, like a chocolate cake (this is only needed for the first visit). West of the Ice Gate is the entrance to Trollweiss Dungeon. 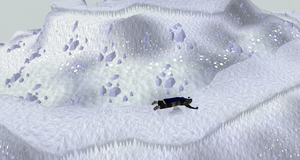 A player slips as he falls on the Ice Path.

Because of the extremely cold conditions, players cannot run after passing the Ice Gate (although this effect can be countered by bathing in saltwater spring in the spa at Oo'glog) and will have their life points periodically reduced by 200. Other stats (except Constitution and Prayer) are also reduced in the same fashion by one while on the Ice Path. Overloads can however be used to preserve combat stats, similarly extreme potions can preserve their respective stats through reapplication. Towards the end of the path, after defeating Kamil, players must use spiked boots on the ice shelf to be able to walk at all; however, they may still slip and fall several times, taking damage.

This information has been compiled as part of the update history project. Some updates may not be included - see here for how to help out!
Retrieved from ‘https://runescape.wiki/w/Ice_Path?oldid=35386651’
Categories:
Hidden categories: