From the RuneScape Wiki, the wiki for all things RuneScape
Jump to navigation Jump to search
The Old School RuneScape Wiki also has an article on: osrsw:Eblis
Eblis? (edit)

Eblis is a Zarosian mystic from the Desert Bandit Camp. Eblis seeks to free the Mahjarrat Azzanadra from his prison in the Jaldraocht Pyramid. Following the Desert Treasure quest, he can be found wandering near the Bandit Camp lodestone.

His ancestors were forced into the desert in order to survive, something that he hates.[1] He and his fellow Zarosians wait for the day they can reclaim Zaros's empire.[2] He has a particular hatred of outsiders, especially those from the Varrock Museum, believing them all to be opportunistic thieves who would take what little he and his people have left for personal gain.[3][4]

When an adventurer, seeking Desert Treasure, approached him, he initially thought that they were from the Varrock Museum and refused to help him. However, when they soon asked about the Diamonds of Azzanadra he believed they were willing to help him, and explained how they were stolen. He offered to help track them if the adventurer obtained the items needed to create a number of mystical mirrors, which could be used to track the diamonds' power and thus approximate location. He set the mirrors up near the Bandit Camp lodestone. When the adventurer successfully obtained all four diamonds, he explained further, stating the diamonds themselves were Azzanadra's power and begged the adventurer to free his lord. When the adventurer returned afterwards, Eblis was disappointed that Azzanadra had supposedly ignored his followers, but concluded that his lord was merely dealing with the effects of his long imprisonment.

He offers to sell a single ancient staff for 80,000 coins once Azzanadra has been freed, an heirloom passed down from the warrior mages during the days of the Empire.[5][6] Buying the staff completes the Buying Up Ancient Artefacts requirement for the master quest cape.

Afterwards, he remains by the mirrors, believing the spot to be important.[7] After the Fate of the Gods quest is completed, he may be informed of Zaros' return, and initially believes that they are joking but soon realises that they are serious, where they the large amount of anima and divine energy in the surrounding area, believing it to be a remnant of the Kharidian–Zarosian War. He would later learn of Zaros' return and subsequent departure to Erebus along with Azzanadra's ascension to godhood, thanking the adventurer for the news. 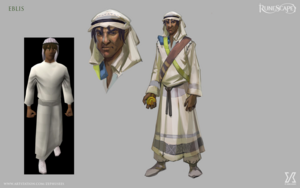 Concept art for a graphically updated Eblis, which was designed for Archaeology. Ultimately, Eblis was not updated.

Eblis is a collector, showing an interest in Senntisten Dig Site's artefacts. All artefacts donated to collectors must be unnoted.

Finery of the Inquisition[edit | edit source]

Urns of the Empire[edit | edit source]