From the RuneScape Wiki, the wiki for all things RuneScape
Jump to: navigation, search
This article is about the vampyrised version of Safalaan. For other uses, see Wyrd (disambiguation). 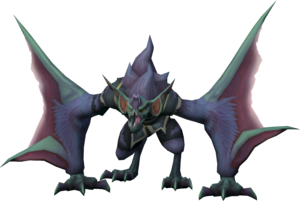 Wyrds are rare, corrupted version of Icyene-born vampyres, created by experiments in Haemalchemy. The only occurrence in the game is the insane vampyrised version of Safalaan Hallow, who serves as a boss fight during the River of Blood quest. Like all vampyres, they are only vulnerable to the Ivandis Flail and Blisterwood. The player can fight Wyrds twice during River of Blood, once alongside Ivan Strom at the River Salve, and again at the top of Castle Drakan at the end of the quest. During the second fight, he will initially attack Efaritay, but will attack you once her life points are depleted. As he counts for Vyrewatch slayer assignments, the slayer helm may be used when fighting him for a damage and accuracy buff if that is a player's task.

He has two main special attacks. The first is a sonic wave attack that deals 15000 melee damage if you are standing in front of him. This can be reduced by prayer and Debilitate. The second is a blood geyser which he spawns underneath you, and deals heavy magic damage. Both of these attacks can be avoided by stepping away from him. If you are too far away from him, he has another ability "Get over here", in which he telegrabs you and brings you to him.

When fought at the end of the quest, his hallucinogenic poison makes him appear as Vanstrom Klause and Lowerniel Drakan, and use their "Let the blood consume you!" and "Ha ha ha!" special attacks, respectively. Both can be avoided by running from the pools of blood that appear on the floor.

After he is defeated, he gives players Wyrd blood, which can be used to create the Extreme Guthix balance to restore his sanity.

Safalaan Hallow is the not the first Wyrd. According to Efaritay, these corrupted creatures date back to her own time in the Third Age. They were rare, powerful creatures that took out many Icyene during the fall of Hallowvale.

The update history project is a work-in-progress – not all updates to this topic may be covered below. See here for how to help out!
Retrieved from ‘https://runescape.wiki/w/Wyrd?oldid=35378760’
Categories:
Hidden categories: