From the RuneScape Wiki, the wiki for all things RuneScape
Jump to: navigation, search
The Old School RuneScape Wiki also has an article on: osrsw:Kamil 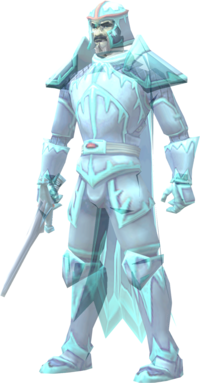 Kamil, the Knight of Ice is one of the guardians of the Diamonds of Azzanadra. He must be killed to progress through the Desert Treasure quest. He uses ice spells, which will freeze the player, and sometimes a stronger melee attack. In addition, the extreme cold when fighting him will reduce the player's stats constantly. He is weak against fire spells; this, coupled with the weakness of his spells, means using fire magic is advisable against him. It is recommended to use Freedom and Anticipation during the fight, as his ice spells can also stun the player.

Kamil is fightable along with Fareed, Damis and Dessous as a class B boss monster in the Dominion Tower minigame if the player has completed Desert Treasure. See Dominion Tower/Desert bosses strategy for a guide on how to defeat the combined four bosses.

Getting to Kamil[edit | edit source]

The entrance to the ice path

Kamil is reached east of the Ice Path, north of Trollheim. To get there, teleport to Trollheim, which requires 61 Magic and completion of Eadgar's Ruse quest, and walk to the Ice Gate. If you have not done so already, talk to the troll child outside the gate and give him something sweet, like a cake, so he will let you through (you only need to do this once). Squeeze between the gate, then kill five ice trolls (level 89) to make the icicles blocking the cave in the southeast break away. Go through the cave and head up the Ice Path, past the ice wolves (level 95) and you'll enter Kamil's arena, where the battle is fought. For a more detailed guide, see the Desert Treasure guide.

Kamil has a fairly low number of life points and should be killed fairly easily. Protect from Melee or Magic should also be used if possible to reduce damage taken. However, the environment he is in and the effect of his freezing magic to stop the player attacking makes the fight tedious. He can also teleport next to the player, similar to Abyssal demons. It is recommended to wear the best magic armour possible and use the strongest fire spell the player is capable of, as Kamil is completely immune to many non-fire spells. Super restore potions and food such as monkfish are recommended. The player should remain in melee distance with Kamil, as attempting to move away will cause him to freeze the player more frequently and teleport next to them.

If you plan to bring a familiar to help you, dismiss it before you fight Kamil or you may get the message "It's not after you..." and Kamil will stop fighting. He will then walk away and reappear at full health.