From the RuneScape Wiki, the wiki for all things RuneScape
Jump to: navigation, search
For the outfit, see House Drakan outfit. 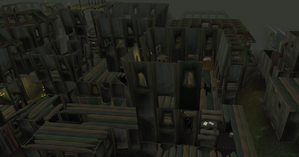 House Drakan is the current ruling government of Morytania, the swamp-nation east of Misthalin. House Drakan has ruled Morytania for more than 4,000 years through its master, Lord Drakan.

House Drakan consists of the vampyric nobility, including Lord Drakan and those related to him. The Drakan family itself is known to consist of Ranis Drakan and Vanescula Drakan, but other, more distant relatives, such as Malak, are also part of the house.[source needed]

According to Vanescula, House Drakan had a civil war against House Jovkai, narrowly losing to their opponents.

Lowerniel Drakan's mother was once the matriarch of Vampyrium who served Zaros, but eventually fell from his favour and was turned into a crystal of blood used to empower Nex.

This information has been compiled as part of the update history project. Some updates may not be included - see here for how to help out!
Retrieved from ‘https://runescape.wiki/w/House_Drakan?oldid=35490844’
Categories:
Hidden categories: