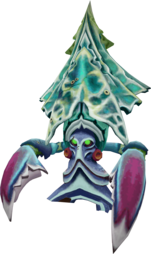 Agoroth is a large Crassian and the final boss of the novice quest A Shadow over Ashdale, who emerges from the Empress after you have defeated four of his tentacles. He has a maximum of 39,600 life points (scaled with the player's level), and can be fought weekly after the quest as a Distraction and Diversion.

After half his health has depleted, Agoroth may temporarily shield himself from attacks and spray acid from above, dealing 1/6th of the player's max life points on contact. The shield blocks direct damage from player, however area of effect attacks (such as Death's Swiftness or Sunshine) and damage over time effects (such as Combust or Dismember) may continue to harm him. The damage from acid sprays can be avoided by running away from shaded spots. Players can also run up the ladders at the rear of the ship to be shielded from all attacks, including the tentacles.

After the quest, Agoroth may be fought again in the Ashdale Caves by accessing the Dead Man's chest. Entering the caves after the quest will bring the player directly to the Agoroth boss room and the Dead Man's Chest will be placed prominently in front of the player. Successfully defeating Agoroth again grants a listed reward that may go up to 41,290 coins, or a black pearl that provides bonus experience equivalent to a prismatic medium fallen star in the skill of the player's choice. The reward can be claimed by searching the chest again after the fight. Non-members are only able to kill Agoroth once per week, while members are able to kill him twice per week.

The fight is safe; if killed, players will respawn on the ship at the beginning of the fight, but if all four tentacles are already killed they do not have to be killed again. Although players cannot leave the ship until Agoroth is killed, players can go up the stairs to the section at the back and then exit to the lobby to escape the fight.