From the RuneScape Wiki, the wiki for all things RuneScape
Jump to navigation Jump to search
This article is about the Distraction and Diversion. For other uses, see Pit.

The Pit is a Distraction and Diversion featuring a large game arena. It is Agility-based and gives Agility experience and a gorilla mask if successfully completed, and a chance for a nimble outfit piece even if unsuccessful. The Pit is run by Scrambles and Snotgut.

By completing a lap on an agility course, players may attract the attention of a talent scout. It does not matter if obstacles are failed (like the deathslide in the Werewolf Agility Course); there is always a chance to be attracted after completing a full lap. If a greenish arrow is flashing above the scout's head, talk to him to be offered the chance to go to The Pit. There will also be a coloured chatbox message when he is interested. If he is not spoken to within a minute or so, he will lose interest, and the opportunity will be missed. The attention of the talent scout can only be obtained once per hour. The chance to attract the talent scout is roughly one in 35 laps (based on counting the laps required for seven attractions).

Players with 99 Agility can speak to the Talent scout while wearing an Agility cape, Max cape or Completionist cape for free shots at the events. After completing an event, a small amount of experience will be received, but the experience cannot be gambled. You still have a chance to receive a piece of the nimble outfit, but only on a successful challenge completion.

Once at the pit, players will be set one of the challenges to complete, chosen at random. Completion of the task will give the player a large amount of experience, the chance to gamble it all, and a Gorilla mask. Failure will result in the player being granted experience similar to completion of a lap of the course they were previously on.

Note: The time a player has to complete each event is limited. As such, it may not be beneficial to skip the dialogue at the beginning by clicking on the minimap; the event for an entry will be unknown until it starts then. The timer starts upon swinging into the centre of the area.

If the player logs out and back in during the event, they are removed from The Pit without a reward. 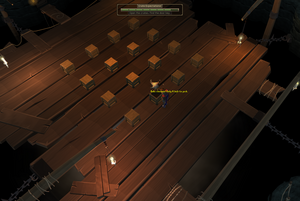 Players must find a key by opening the numerous crates in the arena. However, only five crates can be opened. Once five crates have been opened and no key is found, the player fails the event. There are 16 crates arranged in a 4x4 grid. Some crates may also contain chickens.

Given player's capacity to choose only five of the crates, they have a 31.25% chance of completing this task successfully.

The Floor is Lava[edit | edit source] 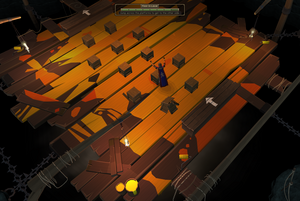 The Floor is Lava game.

The player must cross from one side of the arena to the other by jumping on the crates. However, some of the crates are weak and will break when you jump on them. If one of the weak crates is jumped on, the player fails the event.

It is currently unknown exactly how many of the crates in each game are weak, and so there is no accurate statistic of how often this game may be completed. There are several current suggestions for possible odds here:

In addition, success is not affected by the Surefooted aura. 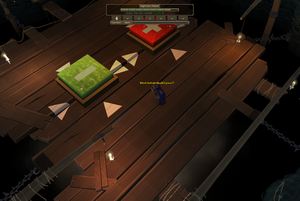 The High-low There game. 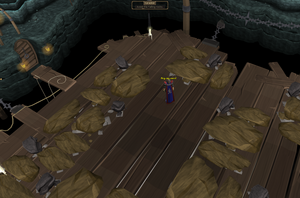 The player must avoid falling rocks for approximately 40 seconds. As with most of the other minigames, this is mostly a game of chance, although there is a small amount of time to run away from falling rocks just before the larger rocks fall.

The best way to play this game is to keep running. The only way to be sure of this is by clicking the minimap before you end your end point of the previous click. Also keep an eye on the areas with the most walking space, since you have a smaller chance to end up standing still there. Optimal execution gives an almost 100% certainty of winning. 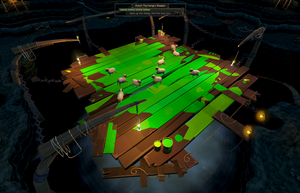 The Punch the Hungry Sheeps game.

A sheep has eaten a key. The player must find the key by punching the numerous sheep in the arena. However, only 5 of the 14 sheep can be punched. If the player punches five sheep and no key is found, the player fails the event; otherwise, the player succeeds.

Given the player's capacity to choose only five of the sheep, and assuming that each sheep is equally likely to hold the key, they have a 35.71% chance of completing this task successfully.

Put the Thing in the Other Thing[edit | edit source] 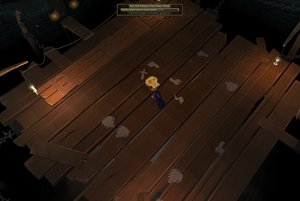 The Put the Thing in the Other Thing game.

The player must fit three different blocks into each of the three indentations on the ground so that the block matches the indentation. If the time runs out, the player fails the event.

When a block is clicked, it is picked up and held above the player's head, and so only one can be held at any given time. This is the only game that can be completed successfully if done correctly, as it is based on skill rather than pure chance like the others. However, since the event is timed and since the picking up and dropping of pieces takes time, it is strongly suggested only blocks that are intended to be used are picked up. Look at the indentations first to know which blocks to pick up. The blocks on the floor may be rotated, so be sure to look carefully if the right block cannot be found for any of the indentations.

This event can be somewhat 'cheated' upon by hitting the North on the compass before starting and examining each of the indentations. By knowing what to put in before hand, there is a higher chance of beating this event. Time runs down extremely quickly in this event, so speed and accuracy are key. 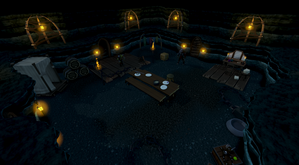 Players will receive experience based on the agility course they were training at and the event they received.[1] Players also have a 1/3 chance of receiving a piece of the nimble outfit after an attemped (successful or unsuccessful) game of The Pit.

The first successful completion of a game will reward a gorilla mask. Additionally, experience will be rewarded, in the range of 648-10125 experience. Success will also give the option to gamble (See the gambling section).

The experience for succeeding, before gambling, for each game at each course is as follows (Some values may not yet have been updated and are therefore inaccurate):

Players failing a game will also receive experience, but this will be much reduced from that received when succeeding. The experience is approximately how much would have been received by running the course in the time it took to take part. However, the amount received is fixed and not dependent on the actual time taken. This is generally in the range of 100-1500 experience.

The experience for failing for each game at each course is as follows (Some values may not yet have been updated and are therefore inaccurate):

Players with an Agility skillcape can access the pit at any time by talking to a Talent Scout. Doing this will still give a gorilla mask upon succeeding, in addition to reduced experience as follows:

Upon successfully completing the event, there is the option (with noted exception) to gamble by opening the Risking Crate. This will either give double experience, normal experience, or half experience; the outcomes have an equal chance of occurring. Accessing the pit with the use of an Agility skillcape will not give the option to gamble.

The expected value of gambling is 7/6x the experience without gambling. In the long-term, gambling is expected to provide 17% more reward xp from The Pit.

Concept art for The Pit