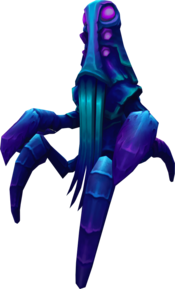 The Crassian ritual keepers are monsters summoned during the fight with the Ambassador in the Shadow Reef. As their examine suggests, they cannot be killed by the player, as all incoming damage dealt to them is reduced to 1 damage.

In normal mode, they begin to spawn once the Ambassador health reaches 550,000 in groups one more than the current number of players fighting him, being 2 in solo, 3 in duo, and 4 in trio. One group spawns when the Ambassador first reaches 550,000 health, and further groups spawn after certain intervals of time. They are killed by Seiryu the Azure Serpent after reducing the Ambassador's health to 400,000.

The update history project is a work-in-progress – not all updates to this topic may be covered below. See here for how to help out!
Retrieved from ‘https://runescape.wiki/w/Crassian_ritual_keeper?oldid=35378914’
Categories:
Hidden categories: