Tentacle (A Shadow over Ashdale)

From the RuneScape Wiki, the wiki for all things RuneScape
Jump to: navigation, search
For other uses, see Tentacle (disambiguation). 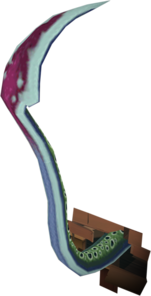 Four tentacles are fought during the A Shadow over Ashdale quest and Agoroth D&D, while the player is on a ship known as "the Empress". They attack players who are close to them with typeless damage, and once all four of them are defeated, Agoroth will emerge. Damage to them is capped at 40.

Two tentacles will be present during the fight with Agoroth, and while they can no longer be attacked, they can still damage players if they get close enough.