The wyvern crossbow is a two-handed crossbow that requires level 85 Ranged to wield. It was released along with wyverns, which have a 1/2,000 chance on task, 1/10,000 off-task chance of dropping the crossbow.

It uses wyvern spines as ammunition, which are a common drop from wyverns. However, any bolt ammunition can be used with the crossbow, including Dragonbane bolts and Ascension bolts (which will have their damage scaled down to match wyvern spines). 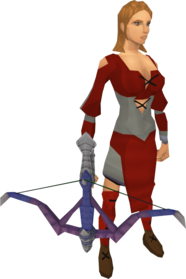 The wyvern crossbow has a damage-over-time effect - appearing as poison hit splats - which deals more damage the longer the player is attacking their target. The damage over time effect has 10 different "tiers" of damage it can do. Every single hit from an ability or auto attack cast by the wyvern crossbow (including multiple hits from bleeds but not including hits from puncture) has a very high chance (50%) of activating the passive. When the damage-over-time effect activates, it will increase the current poison tier by 1 and does poison hit splats of its current tier until it has either done 6 hits, or its passive has activated again.

The crossbow will degrade to a broken state after 60,000 charges of combat (but loses 2 charges per hit, so has a minimum duration of 5 hours of combat). It can be fixed by Repair NPCs such as Bob in Lumbridge, or at an armour stand in a player-owned house. A full repair, without discounts, costs 4,125,000 coins.

The wyvern crossbow can be augmented using an augmentor.

The base repair cost of the Wyvern crossbow when completely degraded to 0.0% item charge is 4,125,000 coins. It can be repaired by: