From the RuneScape Wiki, the wiki for all things RuneScape
Jump to navigation Jump to search
The Old School RuneScape Wiki also has an article on: osrsw:Shooting Stars
"Meteor" redirects here. For the ability, see Meteor Strike.

Fallen stars do not give geodes, so geode-finding equipment provides no benefit. 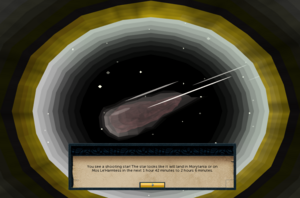 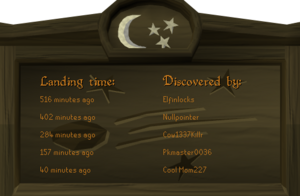 In the Observatory professor's house, there is a noticeboard that lists the last five stars to be discovered on that world, how long ago they were, and who discovered them.