The reset time for jadinkos is the same as weekly resets; Wednesday 00:00 UTC. (Players need to be aware of the weekly reset for their geographical location.)

Jadinko hunting is a weekly Distractions and Diversions for Witchdoctor clothing and farming, hunter, or herblore experience which was released with members only Herblore Habitat on 24 November 2010.

If the player catches at least one of each regular jadinko type in the same week, Papa Mambo will message in 'All Chat' regarding the reward. A player may choose to receive experience in farming, hunter, or herblore. The amount of experience earned is equal to twice as much experience as the player would receive for turning in a pair of strange rocks. The three tracking jadinkos (Shadow, Diseased, and Camouflaged) must be caught within Herblore Habitat while the remaining jadinkos may be caught in either Herblore Habitat and/or Anachronia. 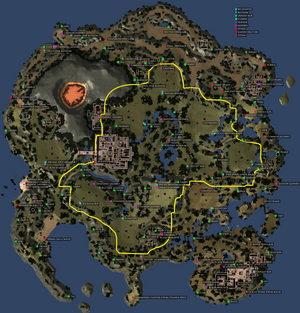 The Anachronia jadinkos are easier - bring a 2-3 dose juju hunter potion for red/green vine blossom (only for Cannibal, Aquatic, or Draconic jadinkos) and marasamaw plants, no noose wand hunting and without the need for changing habitats.

If the player catches all the jadinkos but does not claim the reward from Papa Mambo, the reward will be lost at the next reset.

, where x is the skill level.

On any week that the player catches all of the normal jadinkos at least once, the player will have a random chance to get either the witchdoctor legs or witchdoctor robes regardless of what piece(s) the player has already obtained.

The player will receive the witchdoctor mask when the player has managed to catch three god jadinkos in the same week as the player has caught ten regular jadinkos.

In order to obtain all 3 pieces, the player must have 55 Agility, 81 Hunter, 77 Farming, 54 Herblore and optionally 80 Construction (or money to pay for environmental features to be built). Boosts and assists can be used for Construction, but assists cannot be used to bypass the Farming requirement as the Kalferberry and Lergberry seeds are untradeable. Players can only receive one piece of either witchdoctor robes/legs during the same week and it is not uncommon for a player to get the same piece multiple weeks in a row.

The Witchdoctor camouflage gear set can be stored in the armour case of the player's costume room in the player-owned house. All three items are stored together.

After obtaining one or more pieces of the witchdoctor armour, if a player talks to Pauline Polaris at the Livid Farm on Lunar Isle, they will receive Mambo's potion. When consumed, Mambo's potion will grant the player an extra 3,000 Farming experience. The player may only receive the potion after having watched the Livid Farm introduction.

The update history project is a work-in-progress – not all updates to this topic may be covered below. See here for how to help out!
Retrieved from ‘https://runescape.wiki/w/Jadinko_hunting?oldid=35263305’
Category:
Hidden category: