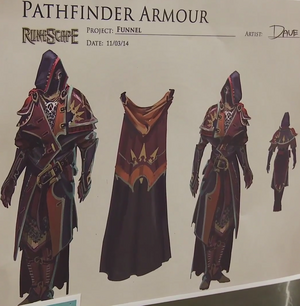 This set, at least in free-to-play, is very marginally better than any level 10 armour sets. This is the best armour set to wear until level 20 armour is accessible, except for the hood, in which case the Mask of Dragith Nurn is better.

The pathfinder armour set can be stored in the Armour case in a Player-owned house.

This information has been compiled as part of the update history project. Some updates may not be included - see here for how to help out!
Retrieved from ‘https://runescape.wiki/w/Pathfinder_armour?oldid=35578863’
Categories:
Hidden categories: