A Shadow over Ashdale

From the RuneScape Wiki, the wiki for all things RuneScape
Jump to navigation Jump to search
Not to be confused with Ashdale Tutorial.
For the achievement, see A Shadow over Ashdale (achievement).

A Shadow over Ashdale is a free-to-play quest featuring the island of Ashdale. The quest has no requirements but the combat is scaled like in The Death of Chivalry. The quest features puzzles, and unlike most other quests, it presents story by environment rather than by dialogues. It was first announced in Behind the Scenes for April 2014.

Recently, ships ferrying supplies to Ashdale have returned with their cargo still aboard, reporting that the island has apparently been deserted. Gudrik is eager to investigate the mystery, but he is too old to do so himself – he needs someone to travel the island and find out what is wrong.

Speak to Gudrik just east of Gerrant's Fishy Business in Port Sarim. He says that the supply ships that are regularly sent to Ashdale, an island located near the Feldip Hills, have started returning with their cargo still aboard. The island is apparently deserted and an evil aura hangs over it. He asks you to travel to Ashdale to investigate. 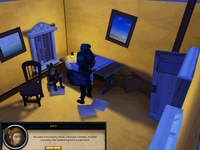 Lucy, one of the residents of Ashdale, too frightened to leave alone.

Speak to Gudrik again and select the option to travel to Ashdale by night. When you arrive in Ashdale, walk through the town. You will encounter some slime and a claw on the way, inspect them if you wish, and then continue until you meet Lucy, who is cowering in her house. She tells you that the town was attacked by horrible creatures, and although she avoided them by hiding in her attic, the townspeople were taken away. She doesn't know where they are now, but guesses they may be under the island somewhere. You say that you need to get to the other side of the island and she suggests using the sewers, which can be entered through a pipe behind her house.

Enter the sewer from the storm drain out the back door. The sewer is populated by a few non-aggressive level 2 sewer rats, and three coin spawns can be found along the way; pick these up if you wish (60, 50, and 40 coins, respectively).

When you reach a large chamber, you will step in some slime and a crassian scout will ambush you from above. It attacks with ranged and melee, and has the ability to stun you and then retreat to attack you from a distance. When its adrenaline bar reaches over 50%, it gains the ability to use an attack which will damage you heavily, depleting its adrenaline in the process. Alternatively, you can run past the scout. On death, the crassian will drop a minnow. Although picking it up is not necessary for the quest, it can be eaten to heal 150 life points.

Continue down the sewer and you will eventually reach the second chamber, with a second crassian scout. Either run past it or kill it and head up the ladder.

You will emerge from a storm drain in the Ashdale Farm, now devoid of cows. Head south up two sets of stairs (past the minnow pond), and after a short cutscene showing a house, you'll reach two more crassian scouts. Again, either dodge them or kill them.

Go through the gate to the south and enter the house at the top. Search the table to find a page from an old journal, which explains that the house was built by the Fourth Age architect Ogden Plainview, on top of a seastack that houses a vertical tunnel which leads to a large network of caverns. The page also reveals that he was thinking of making a hidden entrance to the caves in the house. Inspect the bust of his head, and the centrepiece of the room will transform into a staircase leading to the caves.

Descend the stairs. You will now be in the large Ashdale Caves with another crassian scout and a dead smuggler. Search the body to find a smuggler's journal, which explains that a band of smugglers had discovered the caves and planned to make it their hideout. They accidentally stirred up a nest of creatures, which abducted their captain and killed the rest of the crew. 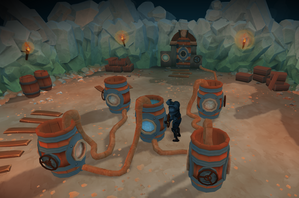 Turning a valve to solve a water-barrel puzzle.

Advance down the cave, which contains another scout. Enter a cavern containing barrels, pipes, and a large door which you must open by channelling water to it. Collect the valve outer wheel, valve inner wheel and pitch. Repair the leak in the pipe using the pitch, combine the wheel parts into a valve wheel by using them on each other and then repair the socket on the central barrel. The barrel at the end of the pipe is already full of water, and you will need to turn the valve wheel on that barrel to move it to the other barrels in sequence, until you flush down the last barrel into the door, which opens it.

Go through the door and enter a chamber where you will find three more crassian scouts. This chamber contains crassian pods, which appear to play some part in the crassian reproductive process. Kill the scouts and the barrier to the next area will disintegrate. Unless you have low life points, do not leave this room without killing all three scouts, otherwise your progress will be reset and you will have to kill another three scouts. Optionally search the chest in the northwest to find 125 coins and an uncut sapphire. 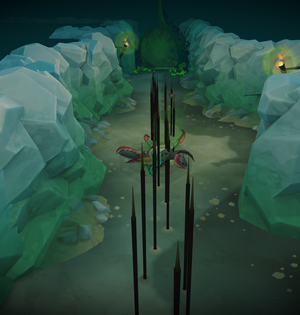 Enter the next tunnel and approach the next area, where a cutscene will show the approach of a crassian warrior patrolling over a corridor with a spike trap beneath it. If you approach the creature, it will fire an unavoidable and unblockable ranged attack that deals damage equal to your current life points. However, being hit and killed by the attack does not count as dying - it simply places you at the start of the area with all of your items intact. To get past the warrior, go over and pull the lever on the opposite wall whilst its back is turned. This will activate the spike trap, killing the warrior and opening the barrier to the next area.

The next area has another crassian warrior moving around a circular trap. Dispatch it in the same way by pulling the lever on the opposite wall while avoiding contact with the creature, which will open the barrier to the next room.

In the third crassian warrior area, there are two separate warriors on two different traps. Avoid the first warrior and find the lever on the northern wall at the second warrior and pull it to dispatch both of them.

Through the next barrier, after the body of another dead smuggler, optionally search a chest to find 500 coins and three more uncut sapphires. In the next area, there are two traps, each with two warriors patrolling. The lever can be found on the northern wall at the second trap.

Continue onward towards a large ship and you will encounter two scouts after a short cutscene, which you can either run past or kill. Optionally search the chest to find 132 coins and an uncut emerald.

Climb on to the ship. Four tentacles will appear from underneath and attack you. Kill each of the four in turn. They have 201 life points and have a damage received cap of 40 life points per hit. Though they are easy to kill, some food might be useful. They attack by slamming the area in front of them, and they shake before doing so, giving you ample time to move away to avoid it.

After they are defeated, a giant crassian known as Agoroth will then emerge from the ship, being revealed to be the true source of the tentacles. You will now need to defeat him in order to save the residents of Ashdale. 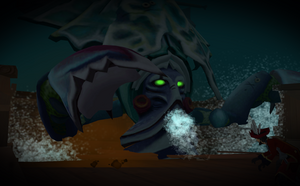 Agoroth bursts forth from the depths of the sea.

Standing close to Agoroth during the fight will result in being hit by a constant 100% hitting attack which deals a constant amount of damage. Standing further away will result in tentacles riding from your side of the ship, similar to the previously encountered ones but not attackable. From the moment you are at their range they will start whirling and then will hit the ground dealing a constant amount of damage if you did not get out of their range, which is wider than how it actually looks. 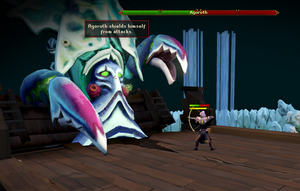 While above 50% health, Agoroth will frequently use a special attack, a flow of water that will knock you back if hit and damage you. This attack covers half of the ship's width and its range is bigger than Agoroth's normal attack. On Agoroth's health bar, there are marks at 3/4, 1/2 and 1/4. Once he is beneath 50% of his life points, Agoroth will start using another heavily damaging special attack in the form of green material falling in patterns on the floor. He will become shielded and invulnerable, and dark marks will appear on two opposite quarters of the floor. Run to an area where there aren't any marks, or you will be dealt heavy damage. When under 25% life points, his special attack will cover 5/9 of the floor, spread diagonally. 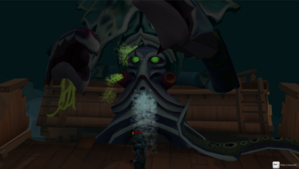 If you find defeating Agoroth hard, you can use some kind of hit and run technique. If you run up either of the ship's staircases towards the stern of the ship, you will be protected from any kind of attack, and you could use a long-range weapon (range or magic) to attack. In order to attack you must get closer, but you can easily attack once or even twice and run back to the safe spot before being hit by the tentacles. Using this method will take some time but will help you win if you cannot manage to win easily. 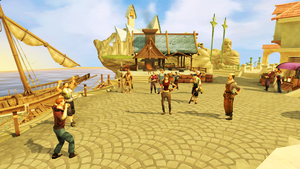 The town is safe once more.

After Agoroth is dead, the townspeople will be freed and cheer for you. You will then be taken back to a much sunnier Ashdale, and you may optionally talk to some of the extremely grateful villagers for them to thank you. When you are ready to leave, speak to Lucy, and you will return to Gudrik in Port Sarim. You will tell him of what has occurred, and he will congratulate you. Ask for your reward to complete the quest. 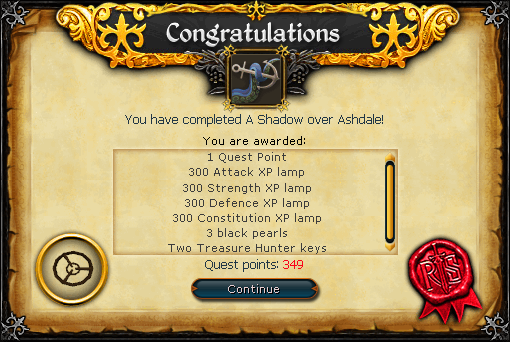 A Shadow over Ashdale is not currently required for any quests or miniquests.