From the RuneScape Wiki, the wiki for all things RuneScape
Jump to navigation Jump to search
This article is about the removed tutorial. For the system introduced on 18 April 2017, see Path System.

The Path was a feature that was automatically enabled for new players once they arrived in Lumbridge after the Tutorial Island tutorial. The path was a series of 7 tasks, guided by Gudrik, aimed at teaching the player basic skills. Completion of each task gave certain rewards, ultimately working up to a full set of pathfinder armour, an amulet of potency, and a ring of potency, when all 7 tasks had been completed.

The player could access the path tab under the Adventures window. On the path tab, the player could view all 7 tasks as well as the rewards each task gives. These tasks had to be completed chronologically. Additionally, the player could toggle the path off if they did not wish to complete it. When a player had path enabled, a help interface appeared in the top-left hand corner of their screen telling them their current objective, as well as having a button to contact Gudrik and a button to toggle hint arrows. 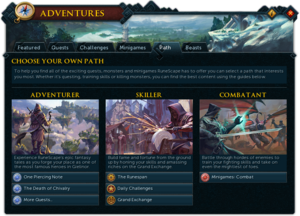 After completion of the path system, the Path tab was removed and the recommendations system could be used instead. It was accessed through the Featured tab of Adventures interface, and recommends various activities to do, such as quests, the combat academy, and minigames. The recommendations system did not, however, provide the player with the help interface that the path system did. If the player's account was created before the Ashdale tutorial was added, the player would have automatically completed the path, and the Path interface didn't appear at all. These players may also talk to Gudrik to claim the pathfinder armour, amulet of potency, and ring of potency.

These tasks were formerly part of the Paths system, but were not in the final version of it.

This information has been compiled as part of the update history project. Some updates may not be included - see here for how to help out!
Retrieved from ‘https://runescape.wiki/w/Path?oldid=35688420’
Categories:
Hidden category: