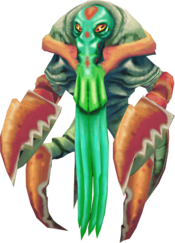 Crassians are an ancient, aquatic race.

They are first encountered during the quest "A Shadow over Ashdale", and again in Beneath Cursed Tides, in which Hector Vivian calls for a group of Crassians to aid him in fighting the adventurer and Wizard Myrtle.

The Crassians are a mysterious species, whose history is mostly unknown. They are known to have existed at least during the Second Age.

Age of the Empire[edit | edit source]

During the height of the Zarosian Empire, a leviathan was reported to destroy ships in the ocean that threatened the city's sea commerce. As it left very few survivors, it was believed to be mere legend, but the Zarosian Church was able to confirm these reports as genuine. They approached Ophalmi, the best fisherwoman of the Empire, and commissioned her to hunt the beast down. Seeing this as the challenge of her lifetime, she accepted, heading out to sea with a group of men. Armed with a necronium hook and magically enchanted rope, she set out a bait that the leviathan took. While the leviathan put up a fight, Ophalmi was able to bring the leviathan close enough for the men to kill it with harpoons, though she died soon after it. Both Ophalami and the leviathan were then interred in Senntisten's graveyard.

The following takes place during A Shadow over Ashdale.

In the year 169 of the Fifth Age, Captain Mulligan and his crew of smugglers set up a base underneath Ashdale's caves. While the men convinced Mulligan to leave, as they were making preparations, Anders accidentally slipped and set off a cannon, attracting a large swarm of Crassians. The Crassians easily killed the crew before setting out to the surface, where they began kidnapping the people of Ashdale. Gudrik, a dwarvern adventurer, tasked a human adventurer with investigating after getting reports that ships were returning to port with their cargo intact. The adventurer discovered Lucy, a citizen of Ashdale, who told them that mysterious creatures were kidnapping people at night. They discovered more Crassians and defeated their leader, Agoroth. Leaderless, the Crassians have not dared to venture to the surface again.

The following takes place during Beneath Cursed Tides.

Some Crassians would be summoned by Hector Vivian to stop Wizard Myrtle and the adventurer from breaking the curse he had placed on Tutorial Island. The adventurer was able to cast spells on them to send them away.

The following takes place during Pieces of Hate and Curse of the Black Stone.

Captain Rabid Jack controlled a zombified Agoroth known as Zogoth prior to its death to the adventurer. Numerous numbers of Crassians also served The Ambassador, who sent them to the Temple of Aminishi as part of an alliance with the Acolytes of Seiryu. Apart from a a particularly large Crassian, the rest of them were mostly summoned by cloaked zealots. More were present in The Shadow Reef as guards and ritual attendants. These were all killed by the World Guardian and their allies.

Many Crassians resemble a combination between crabs and squids, although the leviathan, has a more eel or hydra-like appearance. Crassians that use melee attack with their claws, while those that use range spit acid at the enemy.

The life cycle of Crassians appear to be relatively unknown, and may be different. The Crassians of Ashdale are known to put their victims in a pod to slowly transform them into one of their own, although if the process has only just started, the victim can be freed before any major changes occur. It is not known if they can also reproduce naturally, as baby crassians could be seen in the Shadow Reef. However, it is also important to note that the Crassians that serve the Ambassador are significantly darker, perhaps as a result of corruption, while independent Crassians are brighter.

Crassians can also be bound to serve proficient mages, who can also curse humans into crassians.