The official worlds for Penguin Hide and Seek are worlds 60, 71 (P2P).

Penguin Hide and Seek, also known as Penguin Hunting, is one of the broadest extensions of Distractions and Diversions and can be used to earn money or experience in any skill. Penguin Hide and Seek was released with the original three Distractions and Diversions on 2 September 2008. The main objective of the D&D is to hunt down undercover penguin spies and report back to the Ardougne Zoo.

There are no skill or combat level requirements for participating in Penguin Hide and Seek.

A player spotting a penguin.

You spot a penguin!
The jingle when finding a penguin.

A penguin in a cactus disguise

Each week, twelve disguised penguins can be found roaming around RuneScape, resetting every Wednesday at 00:00 UTC. Ten of these are available to everyone, with additional two unlocked with quests as described below. Spying on a disguised penguin awards players various amounts of Penguin Points, redeemable for experience rewards in any skill of choice or tradeable for coins. There are no requirements to get started. To learn more, players can speak with Larry, who can be found in the south-western portion of the Ardougne Zoo, near the penguin exhibit.

Larry gives the player a spy notebook which keeps track of how many penguins the player has spied that week and displays how many Penguin Points the player has. Keeping the book is optional. It can be reclaimed if destroyed.

After Hunt for Red Raktuber, the polar bear Chuck assists players instead of Larry. Chuck is located in the Polar Bear pen, east of where Larry was. 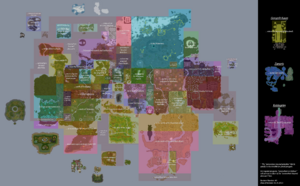 An exhaustive map displaying the hint given if a penguin can be found within; click to expand.

Penguins do not appear as dots on the mini-map, but make large amounts of noise alerting nearby players to their existence. Their volume can be controlled via the ambient sounds Sound effects slider.

Chuck and Larry offer hints to help locate penguins if requested by a player. Some of the hints are general areas, while other are more specific. If players receive more than twelve location hints, it may be because a penguin has recently crossed over into another hint's boundary. Hints may be given for the Shadow Realm penguin's location. In fact, if the player receives a hint for a penguin that is NOT one of the eleven visible penguins, this hint must be for the Shadow Realm penguin. This can be a neat way of spotting the Shadow Realm penguin. Chuck and Larry offer hints for all disguised penguins whether players have already spied on them or not that week. Hints are not given related to the polar bear agent or the sixth 2-point penguin.

Players can use the Quick Chat code e→f→d→p→3 to check how many penguins they have spied, returning:

I have found [AMOUNT] penguins this week.

Players can use the Quick Chat code e→f→4 to check how many Penguin Points they have, returning:

I have [AMOUNT] Penguin Points.

The following quests unlock additional rewards within the Penguin Hide and Seek D&D, but are not requirements for participation:

Completion of some quests grant access the locations penguins roam:

The penguin spies hide in a variety of disguises that help to blend into the surroundings: 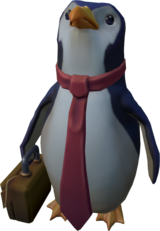 In addition to the disguised penguin spies, numbered penguin agents spawn in random locations. Spying on them yields Treasure Trails reward caskets of random tier, causing the agent to despawn. They do not appear on the minimap and despawn after staying for about two minutes. Agents 001, 002, 003, 004, 005, and 006 are visible to all players, while Agent 007 will only appear for one player after they spot a penguin spy. Like the disguised spies, the agents can apparently wander around to a substantial radius, subject to natural terrestrial barriers. Unlike with normal penguins, players do not need to first speak to Larry to spy on agents. If they are spied whilst the player has a full inventory, the casket is sent to the player's bank.

Agents 001 to 006 appear as regular penguins bearing suitcases, looking identical to agent 007. They can be seen by all players, but will despawn as soon as a single player spies on them, or after two minutes, if no player spots them.

A maximum of ten agents can be spied upon per week, resetting along with the rest of the penguins. This count is a separate one from the penguin spies.

These agents spawn randomly at any of several spawn points, which, as opposed to the Shadow Realm penguin, are not limited to the main continent of Gielinor. World-hopping at a spawn point may aid in finding a penguin agent. Known spawn points include:

Agent 007 is a unique penguin agent which has a rare chance to spawn when a player spies upon a regular penguin after completion of Back to the Freezer. Distinct from Agents 001 to 006, Agent 007 will only appear to a single player, generally within their viewing range, rather than at a specific spawn point. This randomly generated location may be in another room away from where a player is standing, or beyond a barrier such as a wall or fence.

A pop-up and chat notification is provided when Agent 007 spawns for a player; You sense that penguin agent 007 is nearby. If unspied after 1 minute, Agent 007 will despawn; You no longer sense the agent nearby. 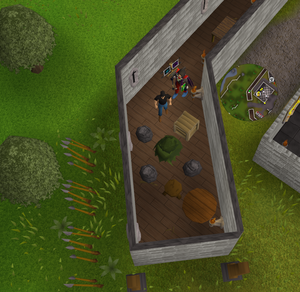 5 penguins trapped in the Yanille wall.

It is possible for penguins to become trapped in locations, preventing their escape. Penguins cannot pass through stationary players or objects, such as doors. Traps can however become broken if a player moves through a game square another player is occupying to create a trap, allowing a penguin to pass freely. If moved over by another player, stepping off that game square, then back resets the player's occupation state on the game square. 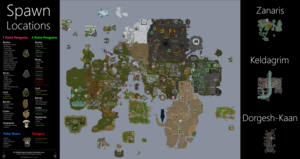 The areas accessible by penguin spies is divided into distinct hint areas. Hints can be gotten from Larry, Chuck and the penguin spy device. Hints from Larry and Chuck are giving randomly and they can repeat the same hint multiple times. For this reason it is better to obtain hints from the spy device as it will specify which hint belongs to each penguin spy. When a hint is requested one of the following hints is shown. All hints from Larry and Chuck are prefixed with "I've heard there's a penguin located..." and all spy device hints are prefixed with "Penguin [number] located..."

The hints update accordingly as the penguins wander around.

Penguin points can be redeemed using the Spy Club shop, opened by talking with Chuck or Larry at the Ardougne Zoo. The limit of points that can be stored is 250.

Players can purchase either coins (10,000 coins per point) or XP lamps from the shop. Small, medium, large, and huge lamps are available for 1, 2, 4, and 8 points each respectively. The experience-to-point ratio is the same for all sizes. The experience earned is the same as a Treasure Hunter lamp of that size.

D&D of the week[edit | edit source]

A different distraction and diversion is chosen each week to give the player a Key token for simply participating. Once every 4 weeks, the player may gain a key token for claiming a reward with their Penguin Points. Key tokens can only be received when the Penguin Hide and Seek D&D is the designated D&D of the week.

Following the rework of the activity on 14 September 2020 and lasting to 27 September 2020, the agents 001–006 spawned more frequently and the first spied penguin rewarded the player with a D&D token (penguin hide and seek).