From the RuneScape Wiki, the wiki for all things RuneScape
Jump to: navigation, search
For the Uncharted Isles version, see Crassian warrior (Uncharted Isles).
? (edit) 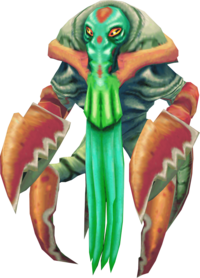 The Crassian warrior is a monster that first appears as a non-combat NPC in the quest A Shadow over Ashdale, and later returns as a combat NPC when re-entering the Ashdale Caves post-quest.

During the quest, it acts as a patrolling guard, which players must avoid as a part of a quest puzzle. If the warrior comes into contact with the player (it does not react if it 'sees' the player), it will fire an unavoidable and unblockable ranged attack that causes 28,000 damage - enough to cause instant death. However, this counts as a "safe" death - the player will respawn with all of their items fully intact in a previously cleared room, even hardcore ironman players. Their attack will, however, consume a sign of life or its variants. They cannot be attacked directly during the quest, and must instead be defeated with traps that are activated by pulling levers located strategically within the room they are found in.

After the quest, they can be encountered and fought in the Ashdale Caves through an entrance in the northwest corner of Ashdale. They use mainly melee attacks, but can occasionally use a ranged attack that may cause poison. They do not use their instant death attack here. However, the poison is unusually potent for a monster of this level as it is capable of dealing over 500 damage.

Please note that all drops from the Crassian warrior can only be obtained after a Shadow over Ashdale.

This information has been compiled as part of the update history project. Some updates may not be included - see here for how to help out!
Retrieved from ‘https://runescape.wiki/w/Crassian_warrior?oldid=35463969’
Categories:
Hidden categories: