Wisps of the Grove

Wisps of the Grove is a weekly Distraction and Diversion. The main objective is to explore The Lost Grove and track up to five different coloured wisps that match the magical mushrooms found near the fairy Teelee. There are no skills or quests required to participate in Wisps of the Grove.

In the centre of The Lost Grove is the great tree. When the great tree requires additional nutrients, it channels its needs through the magical mushrooms found to the south-east. It does so by having the mushrooms change to one of 5 colours: red, yellow, blue, green or purple. The colour of each mushroom informs which essence must be gathered from the wisps. Once the essence/energy has been gathered from the wisps it is made into an elixir and offered to the great tree.

Inspect the glowing standstone to be teleported to The Lost Grove.

Wisps of the Grove is located on The Lost Grove, an island west of Tirannwn. Players can get there by inspecting the standstone south of the poison waste. Players can get to the standstone by using the elder divination outfit teleport to the incandescent wisp colony or the Fairy Ring code BKP and running west. Once the player arrives at The Lost Grove, they may use 5 bittercap mushrooms on the fairy ring on the island and use the code BJS to get there even faster in the future.

To start Wisps of the Grove, first talk to Teelee to obtain a Wisp jar. This jar is used to collect the different coloured wisps that are needed. After obtaining the jar, the mushrooms around Teelee will change colour, and this will correspond to the different wisps the player will have to collect.

The colours of wisps include: 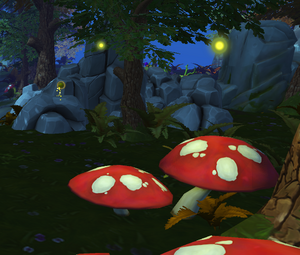 The yellow wisp players may need to catch (left) compared to two yellow wisps that they cannot catch (right).

Around the island are clusters of what appears to be wisps but are not; these wisps fade in and out. The wisps one must catch are slightly larger/darker and have a right click option to examine them. They also emit a trail of sparks.

Only one of each wisp per mushroom colour is required. For example, if there are 2 red mushrooms, players will only need to collect one red wisp instead of two.

Once all wisps have been collected, return to Teelee and she will give the player the wisp elixir in exchange for the wisps they have caught. This can be handed in at the offering cradle at the centre of the island for the reward.

If the player dies while playing Wisps of the Grove, they will lose the wisp jar and will have to restart the D&D. The mushrooms will change colour with each attempt.

Rewards include experience in Farming and Hunter depending on the player's corresponding level, at the same experience rate of a medium prismatic lamp.

The table below outlines the experience received at the corresponding level.