From the RuneScape Wiki, the wiki for all things RuneScape
Jump to navigation Jump to search
The Old School RuneScape Wiki also has an article on: osrsw:The Black Bug 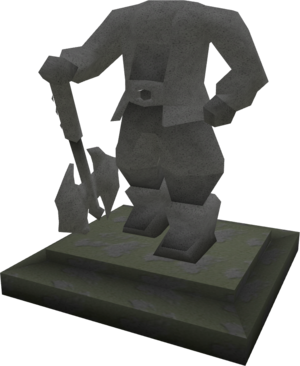 The statue rebuilt for the Black Bug.

The Black Bug is a dwarven mining company presumably based in Keldagrim. The director of the company may be chosen to have their head replace the head of the statue of the King Alvis during The Giant Dwarf quest. Unlike the eight main Consortium mining companies, the Black Bug do not physically appear in the game, as the company is merely an error handler chosen when the game is unable to determine which company director the player chose to replace the head of the giant dwarf statue. This can be accomplished by choosing to skip the consortium meeting cutscene at the end of the quest, which causes the value telling the game which statue head to use to never be set. As a result, the statue will remain permanently headless, and text regarding it will refer to the Black Bug.

For players who skipped the cutscene, the Black Bug is mentioned in the meeting notes[1], by Supreme Commander Bisi[2], and by the player character in dialogue with Miodvetnir, Derni and Dernu[3].