The Era of Prosperity[1] is the current period in the history of Keldagrim, lasting less than 500 years.[2] It is preceded chronologically by the Rise of the Consortium era.[1]

The Era of Prosperity began less than 500 years ago, during the late Fourth Age. At the time, Keldagrim was still hidden from the surface due to the dwarves' belief that the God Wars, which had nearly forced them to extinction, were still raging on the surface (when they had really ended some 1,600 years before).

The death of King Alvis brought about a monumental change of government in Keldagrim. The monarchy, which had become increasingly weak following King Alvis's founding of The Mining Consortium, had lost nearly all of its power and purpose. The Consortium, a collection of 8 mining companies that was originally intended to serve the monarchy, had gained much wealth and power in a very short amount of time. It was decided that a new king would not be put in place and that the Consortium would peacefully take over rule of the city.

The rule of The Mining Consortium quickly brought about a great improvement of Keldagrim. While the city had always been prosperous, the Era of Prosperity brought about a massive number of technological advancements that, even today, remain the most advanced in Gielinor.

Easily the most notable of these advancements was the development of steam engine technology. Using power gathered from turbines, which were turned using the steam from heated water, the dwarves were able to create many new inventions. The water supply from the River Kelda was, and still is, virtually endless, as it is formed by melting snow from atop Trollweiss Mountain.

Transportation became considerably easier with the creation of steam-powered ships and mine carts. The ships, which could travel along the River Kelda, allowed for easier transport of ore, equipment, miners, and other supplies. This, in turn, allowed the dwarves to extend their already impressive mine network to include caves further down the river. Mine carts contributed even more to the dwarves, allowing them to travel many miles to other mines and settlements. Steam engine technology was useful to individuals as well. Improved furnaces, crushing machines, and heating systems were also during the Consortium's rule.

The economic situation of Keldagrim is also believed to have improved, and the Consortium's wealth grew even further. It is speculated that the Dwarven Black Guard and Keldagrim Marketplace may have been either created or improved during this time. 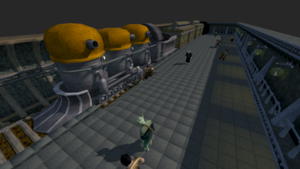 The Dorgesh-Kaan - Keldagrim Train System, a mass-transit network developed during the Era of Prosperity.

The dwarves are in their Era of Prosperity even today, and progress has not slowed. Following the revelation of Keldagrim in the year 169 of the Fifth Age, the dwarves became much more diplomatic. A treaty was formed with the Dorgeshuun with the assistance of the Consortium's Ambassador Alvijar. This eventually led to the construction of the Dorgesh-Kaan - Keldagrim Train System. The Consortium also appears to be involved with the Grand Exchange in Varrock, sending a business dwarf named Hofuthand to the Exchange. Technologically, the dwarves continue to advance, creating the massive blast furnace and the dangerous Dwarf Cannon.

The Era of Prosperity does not seem threatened, although some issues have arose. The Red Axe, the most powerful company in the Consortium, left the city during The Giant Dwarf, and the H.A.M. cult seems set on forcing the dwarves to extinction. Rumour of Arposandra's involvement has also been a cause for concern.

There are still factions within dwarven society that wish to reinstate the monarchy, most notably the Keldagrim Monarchist Society. This is in large part motivated by a long-standing belief that "No band of petty councilors can preserve this city through its darkest days — only a king.", as stated in a fragment of the Azdaran document, the oldest known surviving dwarven historical document, predating even the Age of Kings.

After learning of his descent from King Alvis, director Hreidmar of The Red Axe company had been planning to claim the title of king and overthrow the consortium, using an army of chaos dwarves he created by abducting and converting civilians from Keldagrim. After a suicide bombing against the Lava Flow Mine carried out by a chaos dwarf on Hreidmar's orders sent the city into chaos, a monarchist mob formed and demanded that the Consortium step down in favour of a new king. After some deliberation, the consortium eventually agreed to the crowd's demand. However, unbeknownst to both Hreidmar and the Consortium directors, the records on the dwarven royal lineage had been secretly changed with the aim of keeping Hreidmar off the throne. The forged records instead pointed to the former Black Guard commander Veldaban (passing over his father Dondakan as the kingship had a maximum age[3]), who was quickly crowned king of the dwarves.

After the Assault on The Red Axe Base, the state of Keldagrim depends on choices made by the player. If King Veldaban survived the battle, he may or may not have chosen to abdicate at the prompting of the directors, abolishing the kingship and returning the city to Consortium rule. Alternatively, if King Veldaban did not survive, the Consortium might have seized power in a manner similar to after the death of King Alvis due to the unclear succession. If Veldaban died and the council did not take power, they instead find the successor to the throne; a traveller whose birthname is unknown but who ended up taking the regnal name Drunken Dwarf - supposedly due to forgetting his name due to intoxication, apparently being the third dwarven king to take that particular regnal name as he is known as King Drunken Dwarf III. According to Meike, leader of the Keldagrim Monarchist Society and the very person who changed the royal lineage records earlier, this was not a result of the earlier forgery - Drunken Dwarf III would have also been the legitimate successor of Hreidmar.[4]