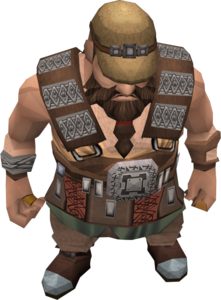 The Blast Furnace Foreman is one of the many dwarves that inhabit the dwarven capital, Keldagrim. The blast furnace foreman helps to oversee the blast furnace, a massive machine capable of efficiently smelting ore.

The foreman helps to direct players as they operate the blast furnace, often shouting out advice on what needs to be operated or repaired. He will also explain how the blast furnace works, offering a simple diagram of the factory's layout.

The foreman also is careful to ensure that those without 60 smithing do not use the furnace; he believes that those inexperienced in Smithing could damage it. He will, however, allow players without the requirements to use it for 2500 coins per 10 minutes (or 1250 with a Ring of Charos).

After the quest While Guthix Sleeps, he sells a Blast Fusion Hammer for 1 million coins, which is used to repair the Dragon platebody.

This information has been compiled as part of the update history project. Some updates may not be included - see here for how to help out!
Retrieved from ‘https://runescape.wiki/w/Blast_Furnace_Foreman?oldid=35697403’
Categories:
Hidden categories: