The Battle of Barendir was a battle between the dwarves of Keldagrim and the Trolls that inhabited a nearby mountain range. It was at this battle that the Dwarven Black Guard's Colonel Grimsson was injured in combat.

In the early Third Age, as the world was rent apart by the cataclysmic God Wars, the dwarven race was threatened with extinction. Despite their efforts to defend themselves, the dwarves soon realised that they would not survive prolonged conflict. Almost the entire dwarven race, much like the gnomes, fled beneath the surface of Gielinor, hiding themselves from the deadly wars above.

The dwarves hid beneath Trollweiss Mountain, a massive mountain that borders what is now the eastern Fremennik Province. While this protected the dwarves for some time, a new threat soon surfaced; the trolls, a species of humanoid monsters native to the mountain range.

Even to this day, the dwarves are locked in a constant struggle with the trolls. While the dwarves have gained the upper hand, the dwarves and trolls have engaged in serious combat many times, the Battle of Barendir being one notable modern example. 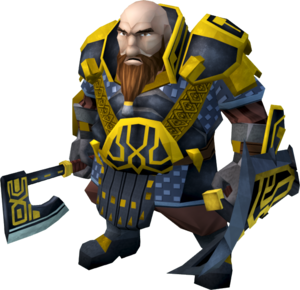 Colonel Grimsson, the hero on the dwarves' side.

Although known details are few, the Battle of Barendir is believed to have been fought in the caves outside of Keldagrim. A tribe of trolls, apparently seeking to gain entry to Keldagrim, soon found themselves locked in combat with the Dwarven Black Guard, Keldagrim's military force led by Supreme Commander Bisi.

The battle lasted for some time, with both sides taking heavy casualties. Only when Colonel Grimsson, a noted dwarven soldier, entered the fray did the dwarves gain the upper hand.

Grimsson single-handedly forced the trolls back, slaying any that crossed his path. Eventually he was faced with the trolls' leader, Dwarf Bone, whom he slew in a one-on-one battle. The fight, however, left Grimsson with a massive scar on his face and in an even more deteriorated mental state.

Despite his wounds, Grimsson continued to fight, attacking madly even as the trolls retreated. His brutal performance earned him his nickname, "The Butcher of Barendir". Ultimately, the Black Guard was victorious.

Although the dwarves had won, the threat of the trolls continued. Even to this day, skirmishes between the two are common.

Colonel Grimsson became increasingly violent following the battle, lashing out against his fellow soldiers. After a brutal attack on a companion, Grimsson was dismissed from the Black Guard. Hreidmar, the director of The Red Axe, took him in as a right-hand man, affectionately referring to him as "The Blood Colonel".