From the RuneScape Wiki, the wiki for all things RuneScape
Jump to navigation Jump to search
The Old School RuneScape Wiki also has an article on: osrsw:Dwarven Black Guard
This article is about the organisation. For the monster, see Black Guard.
"Dwarven army" redirects here. For the low-level tool, see Dwarven army axe. 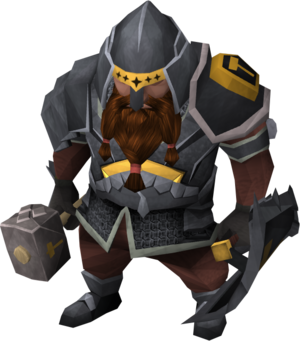 The Dwarven Black Guard is a military and police force that protects Gielinor's dwarven settlements.

The Dwarven Black Guard, also known simply as the "Black Guard", is the main police and military force of the dwarves. Nearly all significant dwarven settlements are protected by this organisation. It is governed by Supreme Commander Bisi, a well-known figure that operates from the Black Guard's headquarters in the dwarven capital city of Keldagrim. Each branch of the guard is ruled by a less prominent but still important figure, such as Commander Lawgof, who helps to protect the mining operation currently underway at the Coal truck mining site. Their black armour is easily spotted, and the warhammers and battleaxes they carry serve to depict their strength.

The organisation has two main purposes; to fight and to govern. Backed by the Consortium's financial success, the Black Guard is able to use vast amounts of weapons and soldiers. The dwarves' problems with the trolls and goblins often require the use of military force, and in these cases, the Black Guard is called upon. The dwarves are best suited to fighting in underground tunnel systems, such as the one that exists just outside of Keldagrim. However, when forced to fight on the surface, the Guard makes use of its most lethal weapon; the famous dwarf multicannon. Automated, rapid-firing abilities make these weapons dangerous both in close combat and at long ranged-battles. The guard generally positions itself and its artillery around the area it is protecting, such as the small camp on Ice Mountain.

The Black Guard also helps to police larger dwarven cities. This can be seen most clearly in Keldagrim, where officers can often be seen patrolling important areas within the city, such as near the bank and in the large marketplace. Sometimes they help in the defence of the city of Falador.

In the year 163 of the Fifth age, a Dwarven ambassador brokered a deal with the Lord Marshall of A.R.M.S. to train Dwarven recruits in warmongering for use in the Black Guard. 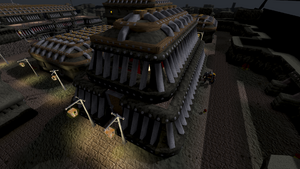 The hidden locations of most dwarven settlements makes the Black Guard a rarely seen force in most of Gielinor. However, in their territories, their power of authority can easily be seen. The Black Guard can be found in the following areas: 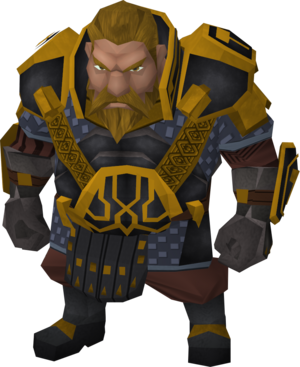 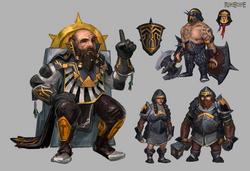