The Era of Kings,[1] also known as the Age of Kings or the Golden Age,[2] was a historical time period in the history of Keldagrim, lasting more than 1600 years.[3][4] Keldagrim was originally ruled by the Council of the Elder Magi, but the monarchy was established soon after. The Era of Kings is estimated to have ended in year 1626 of the Fourth Age.[4][5] It is known as a dark age, although the exact reason is unknown.[6] 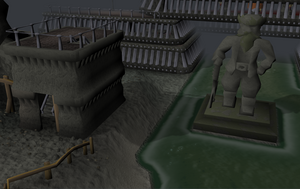 The statue of King Alvis, the last king of the Era of Kings.

In the Third Age, during the God Wars, Zamorak cursed the dwarves, causing them to slowly transform into chaos dwarves, to expand his army and use against the other gods' armies. Saradomin shielded his Imcando dwarves from the curse.[7] The wizards of Keldagrim found and enacted a remedy which would dispel the effects of the curse, at the cost of losing the ability to use magic. This affected all Keldagrim dwarves.[8] Those not shielded by Saradomin or the Keldagrim wizards, such as small surface communities, were claimed by the curse and joined Zamorak's army.[9]

The Council of the Elder Magi believed that with the loss of dwarven magic, the city would plunge into chaos, and the council, stripped of its magic, would not be competent enough to preserve the city and lead it into the future. They believed that an absolute monarch would be able to restore order and, as such, in their final resolution, instilled Captain Gozdaron as the first king of Keldagrim, marking the beginning of the Era of Kings.[10]

Around the middle of the era, the records chamber was built.[11] Previous to this, not much had been recorded about dwarven history. As such, most history books begin dwarven history with this era, and in popular culture, King Gozdaron is seen as a semi-mythical figure, anointed by Guthix himself.[12]

During childbirth, King Alvis's wife passed away. The Consortium's doctor hid the child away and told King Alvis that his son had died as well. His identity was sealed in the records chamber and the door to the chamber was replaced.[14][11] As he never remarried and he had no other children, King Alvis had no official heir and so handed the rule of Keldagrim over to the Consortium upon his death. Alvis's son was adopted by the director of The Red Axe, then a small mining company, and is the ancestor of Hreidmar.[15][16]

With the death of King Alvis, the Era of Kings ended and the Rise of the Consortium era began.[1]