From the RuneScape Wiki, the wiki for all things RuneScape
Jump to: navigation, search
The Old School RuneScape Wiki also has an article on: osrsw:Dwarven Ferryman 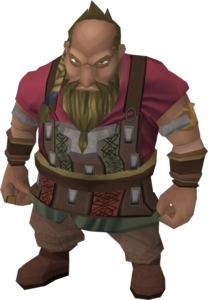 Two Dwarven Ferrymen can be found in the Keldagrim south-west mine outside of Keldagrim.

The ferrymen are both near the entrance to the mines. They will take players across the River Kelda to the deeper section of the mines. Their ferry is two-way (with one of the dwarves operating the ferry from each side of the river) and costs nothing. Originally, you had to pay 2 coins, but now, the consortium is subsidising the trips, making them free.

With the addition of Forgiveness of a Chaos Dwarf, ferrymen are no longer the only method of leaving the Keldagrim mines. Players that have progressed in the Rise of the Red Axe quest series may also travel between Keldagrim and the mines through a small watchtower near the Keldagrim Palace, which formerly possessed no entryway on the Keldagrim side.