From the RuneScape Wiki, the wiki for all things RuneScape
Jump to navigation Jump to search
The Old School RuneScape Wiki also has an article on: osrsw:King Alvis 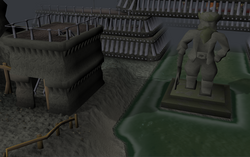 The giant statue of King Alvis before it was destroyed under orders of the Red Axe.

King Alvis was a king of Keldagrim, the capital of the Dwarven Realm. He passed away roughly 500 years ago, but remains amongst the dwarves' most significant historical figures. His legacy is honoured by a statue on the River Kelda, which is relevant in The Giant Dwarf quest.

Although the exact length of King Alvis's rule is unknown, it is known that he ruled the city roughly 500 years ago, during the latter part of the Fourth Age. At the time, Keldagrim was still sealed off from the world, as it had been since the cataclysmic God Wars. Food was always in short supply. Therefore, King Alvis was an even more important figure to the dwarves than a modern ruler.

At some point towards the end of his reign, King Alvis founded The Mining Consortium, a collection of eight powerful dwarven companies that would serve the monarchy. However, the Consortium quickly grew in wealth and power. By the time of King Alvis's death, the monarchy had lost nearly all of its power, and no successor was ever selected. King Alvis was, as a result, the last king of Keldagrim.

It is revealed during King of the Dwarves that there was a conspiracy regarding King Alvis's heir. While the official records stated that both his wife and child died during his son's birth, Meike reveals that the Consortium's doctor who attended during the birth secretly hid the infant dwarf and told King Alvis that he had died. Since King Alvis never had a heir by the time of his death, he handed over the rule of the city to the Consortium. However, the young prince was instead adopted by the childless director of The Red Axe, which by that time was a small, obscure company. By the year 169 of the Fifth Age, Hreidmar was the last direct male descendant ot King Alvis's son, making him the rightful king of Keldagrim. 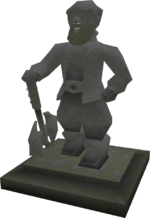 The statue that was built in Year 169 of the Fifth Age to replace the destroyed one. All but the head is a replica of the original.

King Alvis is generally a popular historical figure. Indeed, the colossal statue of Alvis that the dwarves have constructed on the River Kelda is amongst the largest in the world.

During The Giant Dwarf, the player's ship crashes into the statue, destroying it entirely. The player then works to rebuild the statue. At the end of the quest, it is decided that, since the Era of Kings is long over, the face of a mining director will be put atop the statue instead.

In Betrayal at Falador[edit | edit source]

In Betrayal at Falador, the first RuneScape novel, the necklace of King Alvis' wife was shown to be in the possession of the Ice Mountain Dwarven Colony. In order to gain the allegiance of the colony, Kara-Meir was required to repair the broken necklace in the colony's great forge. The necklace was described as being of solid runite and studded with gems, supporting the idea that Alvis and Keldagrim itself were wealthy during his reign.