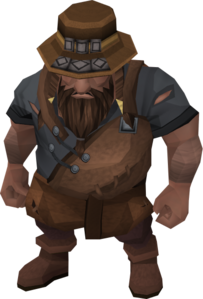 Rind the gardener is one of the many dwarves that inhabit the dwarven capital city of Keldagrim. Rind is a gardener and an experienced farmer, which are rare trades amongst the dwarves.

Rind maintains the gardens that can be found on the west side of the Consortium's palace. Despite Keldagrim being an underground city, Rind manages to grow strange insect-eating plants in the garden, as well as a strange species of subterranean mushrooms. He also knows how to grow the elusive Kelda Hops, although their seeds' rarity has made doing so impossible. Because the garden was neglected so much during the city's recent years, the garden has become very sparse. Rind seeks to fix this, although it has proven difficult.

Rind is also quite knowledgeable in the city's history. His knowledge spans back even to the city's creation, which occurred during the God Wars. He also knows about the city's different ages, such as the Age of Kings and the Golden Age, and is willing to share his findings with adventurers. He also seems to know about the creation of the Consortium, but his vast amount of work usually prevents him from explaining much.

Rind also plays a small role in Forgettable Tale of a Drunken Dwarf, during which he gives the player a letter to deliver to Elstan, the gardener at the farming patch south of Falador.

In the letter, it is revealed Rind tried out Elstan's method in cross-pollinating certain plants after learning about it from Elstan's presentation at the Annual Asgarnia Gardening Conference. After trying certain combinations in cross-pollinating, Rind found out that it lead to triple herbicide resistance in cabbages. He also suggested to Elstan that the next gardening conference should be held in Keldagrim, although he has doubts about the underground setting being presented to other farmers.

Rind can occasionally be found at Manor Farm, asking for help with an easy Farming Guild request.

Transcripts Rind the gardener is the author or co-author of:

This information has been compiled as part of the update history project. Some updates may not be included - see here for how to help out!
Retrieved from ‘https://runescape.wiki/w/Rind_the_gardener?oldid=35725317’
Categories:
Hidden categories: